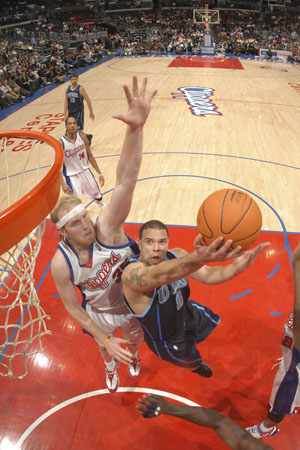 The following feature appeared in SLAM 107. We feel that in light of last night’s performance and big shots down the stretch, it is relevant to post today.

It’s never about Deron Williams. At least not initially. Not that the Utah Jazz point guard doesn’t deserve the focus or isn’t capable of delivering a feature performance. It’s just that, for some reason, the second-year pro has spent most of his basketball life being slept-on, bypassed as a third or fourth fiddle. Just once he’d like to be graded ahead of his peers, be in somebody’s “one of the best point guards” conversation.

“I’ve always been the underdog,” says Deron from a Detroit hotel room, relaxing before tip-off at The Palace. “I’m talking since high school. I had Bracey Wright on my team in high school—he was a McDonald’s All-American and I didn’t get picked for it or any of the other All-Star games. I thought that I was one of the best point guards in the nation in high school and in college. I just got overlooked.”

It’s a shame, since Deron is one of the reasons Utah is currently classed among the West’s top-tier teams. He is the NBA sophomore who led a squad—that on most nights runs a 4X4 offense (featuring four forwards: Andrei Kirilenko, Mehmet Okur, Matt Harpring and Carlos Boozer)—to a franchise-best 12-1 start. During that historic November run, Williams played the Robin to Boozer’s Batman by contributing five double-doubles. The first he acquired on opening night (18 and 10). The second (26 and 14) came 10 days later but was trumped the very next night by the third (27 and 15).

Going into February, Deron is the engine behind the League’s fourth-best record (28-14). After almost doubling his rookie term’s dime and bucket averages while upping his shooting percentage by four percent, he should contend for this year’s Most Improved Player. “I definitely have more confidence in my second year just because of what I went through my whole rookie season with ups and downs,” says Williams. “I worked this off-season and pushed myself to perform better than last year. I came back and did better than I planned.”

Even on the marquee for tonight’s game, Deron’s name is an afterthought. This evening’s big draw is Chris Webber playing his first game as a Piston. The sub-attractions: Whether Boozer continues his high-caliber play or if Chauncey Billups returns to form after a calf injury that sidelined him for eight games. Speaking of Chauncey, who’s now on everyone’s lips as a true star, would you guess that DW’s numbers (17 ppg and 9 apg) are just as good as CB’s (18 ppg and 7 apg)?

On this brisk Michigan afternoon, Deron isn’t even a priority in his own head. Individual success is the furthest thing from his mind. Right now, his team is in a slump, having dropped four straight games, and according to Williams, it’s time to “stop the bleeding.” Since the 6-3, 205-pound guard’s January play hasn’t been up to the level of his November and December productivity, he’s taking the struggles personally. “I’m not playing as well as I think I should be,” he self-assesses before returning to his ‘No-I-in-team’ mind state. “We’re just not playing the same basketball. We gotta get on track. We gotta get that confidence back.”

Maybe his concentration on the concept of “team” has facilitated the continuous eclipsing of Deron’s star. Adidas marketing aside, for fans it is about the superstar. They want filled box scores as well as post-field goal rituals. Gilbert Arenas pumping his chest like a tribal warrior. Shaq getting back on D like a human 747. Off top, can anyone remember what Deron’s NBA 2K7 character does after a lay-up?

Who cares, really? Deron isn’t some blue-collar player who occasionally gets his on the court. Every level that the former Big Ten standout has hooped on, he’s been one of the best and won as a result. In his entire high school career at The Colony (TX) HS, Williams lost just three games. The aforementioned Wright got the love, though. Williams’ three years at Illinois (a career capped by a stellar ’05 Tournament and eventual NCAA Chip trip that would’ve probably recognized Williams as MOP had the Illini beat UNC) totaled just 15 Ls. Although he left college the only player to lead the Big Ten in assists for three straight years, backcourt mate Dee Brown got the props. “Maybe I wasn’t flashy and I didn’t score as much but I really didn’t need to on my team,” says Williams, who plays substantially more NBA minutes than Wright (Minnesota) and Brown (now his backup with Utah). “I only lost 15 games in college so obviously what I was doing worked.”

When it was time for Deron to take his collection of All-Big Ten awards and the ’05 Chicago Regional MOP trophy to The Greatest Show on Earth, he found that he had some believers out there. While some questioned his build and speed, Deron blew up during pre-Draft workouts, impressing the Jazz enough that they tabbed him with the third overall pick. Bigger-rep players Raymond Felton and Chris Paul followed.

Yes, D’s physique looks more round than swift. But if you’ve ever seen a Jazz fast break, you know he’s anything but slow. Though a definite below-the-rim player, Deron packs a diverse offensive game that can net him two points with a floater or three with a near-bench bomb. Then there’s his snappy first step and speed that seems to increase past mid-court. When a defender sees Deron gunning toward ’em with that high yet controlled dribble—almost like the rock is a handball (a la D’s all-time favorite player, Jason Kidd)—they don’t know whether to defend the trey, the drive or the pass. “Being deceptive works to my advantage because guys think they can press me a little more and then [I] blow by them,” he says matter of factly. “I like to push the ball. It’s a big strength of my game. Coach [Jerry Sloan] definitely loves us to do that so it works.”

As a rookie, Williams was utilized immediately at the one, finishing the season averaging 29 minutes, 11 points and a team-leading 4.5 assists per game, all while topping his entire freshman class in three-point efficiency. At the end, he was named to the All-Rookie First Team.

It wasn’t originally supposed to be about Deron Williams in Utah, either. Before he arrived in Salt Lake City, the Jazz thought they had found John Stockton’s predecessor in Carlos Arroyo. The franchise figured since Puerto Rico’s finest played with Stockton during the Gonzaga God’s final two seasons and almost single-handedly dethroned the US Men’s National Team in ’04, he was their guy. Instead, Arroyo proved to be Coach Sloan’s headache. Enter Williams and his relatively impressive first season, though Utah bought some insurance for this season in the form of multiple ring winner Derek Fisher.

But we’re more than halfway through this season and there’s no doubt this is Deron Williams’ team to run. There’s even an ebb-n-flow of rumbles about D’s potential to be the franchise’s next #12. “John Stockton will never be forgotten in Utah,” says Williams, who worked out with the future Hall of Famer over the summer. “They got a statue of him in front of our arena. He’s one of the greatest point guards to ever play the game so I don’t think of myself as the next John
Stockton.” Deron pauses and then adds: “I’m still trying to become Deron Williams, really.”

That goal will be reached much quicker if the Jazz make this year’s Playoffs. There’s no better way to burn your name in the heads of bball lovers than flourishing in the NBA’s second season.

Absent from the postseason since ’03, Utah is looking like a shoo-in. But Deron has some concerns. He knows his team doesn’t want to just qualify for the Playoffs; they want to reincarnate its heavyweight contender days. The young guard feels in order for the Jazz to send home the A’s elite, they need to remember what got them in this great position. “It just seems that we need to get back to Jazz basketball,” he says. “Especially in the offense. When we do that we’re hard to beat because a lot of teams don’t like to defend our stuff. We have a lot of movement in our offense, we aren’t selfish. Look at a team like Dallas, how they move their ball. It’s a thing of beauty.”

But Williams’ team criticism falls on both ends of the court. While the Jazz’ strength is its offense, its weakness is its D. “We gave up a lot of 50 point games [this season]. Michael Redd had 50 [against us], Gilbert had 50, Kobe had 60, Ray Allen had 50. We gotta find a way to stop these scorers.”

Deron got his wish. The bleeding has stopped. Utah defeated the home team Pistons, 100-99. Webber was barely a factor after tip-off, Boozer finished with a solid 20 and nine and Billups lead his team with 26 and seven. But the unassuming Deron was the star of this game. Worker Number 8 put up a career-high 31 points with 10 dimes on the side. Still, it was the “W” that turned his milestone gold. That marquee appears upside down now.

It seems that a new day is near for Mr. Williams. One that will bring anticipation and expectation before the Grade A performance. Notoriety. The Playoffs. Maybe then he’ll develop a signature two-step after reverse laying an opponent flat. Probably won’t happen. Deron is comfortable being slept-on, then waking people up. Though his ball club is on the verge of regaining their once West Coast dominance, the playmaker can’t see the dim light raying on him any different. “People still don’t know my name. I go to [visiting] arenas, sometimes the announcers will call me Duh-RON. I have to make the PR people go and correct them,” he says. “So although a lot more people notice my game now, I still consider myself an underdog.”