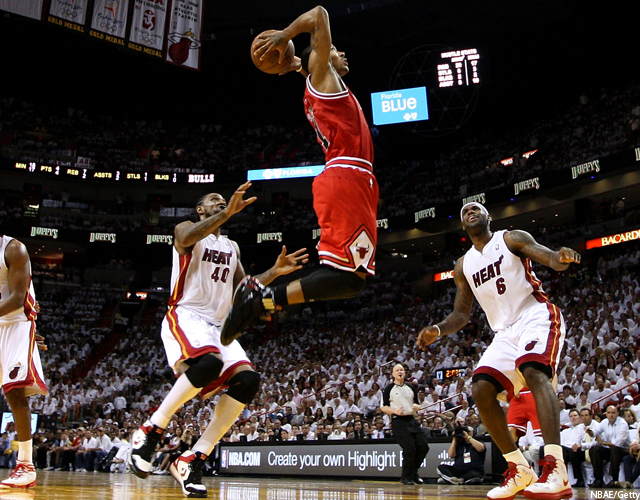 Derrick Martell Rose has had many a glittering label in his brief and blessed career: No. 1 high school player in the country? NCAA Finalist? No. 1 NBA Draft pick? Rookie of the Year? Youngest MVP (22!) in history? The first son of Chicago, as well as the first Mr. Basketball from the state of Illinois, to ever captain the Bulls? DRose has been all of that, and made it look as smooth as one of his spinning drives to the hole.

But in 2013, for the first time in his life, Derrick Rose will be something he has never been: doubted. The young man, who has had nothing but love, now has haters.

For many pro jocks, hate is like caffeine. It is what gets them out of bed and over to the gym. Think about Michael Jordan and how he needed to conjure, exaggerate and even invent slights to keep his intensity at that otherworldly level. Many need the doubt to keep going. But for some, the fuel of doubt can be highly combustible and set them ablaze.

Yes, you need talent to play in the NBA, but there are few attributes more overrated than talent. Most NBA players, if you ask them the question, will tell you they were not the most talented person in their neighborhood, let alone their city. Even in Chicago, it is hard to find someone who will say DRose is the best player the city has produced. Most will say Ronnie Fields. Many will say Benji Wilson. Some will say Isiah Thomas or Will Bynum. Only a few say Dwyane Wade.

Even in the NBA, there is talent all over every roster, but stardom is the province of the few. Many of us argued in 2008 that Kansas State’s Michael Beasley was a better prospect than Rose. But talent is fragile and useless without the armor to protect it and the perspective to nourish it.

Now it is Derrick Rose, the man who never doubted his own magical destiny and appeared on the cover of the previous issue of this magazine, who has to confront doubt and use the hate. He has to do what Magic did in 1980 when he was described as a “coach killer” or MJ when he basically lost his second season in the League to a foot injury, or LeBron every damn day of his career. He has to rise above it all with the confidence of someone alone in a gym.

Whether or not Derrick Rose can shut out the fear, trust his knee and torque his body toward the hoop will determine much of the ’13-14 season. The old Derrick Rose, with a healed Joakim Noah, alongside what we now know we have in Jimmy Butler, dethrones the Miami Heat. Absent this, the only drama at the top of the Eastern Conference will be whether LeBron gives us the best sports narrative since Muhammad Ali rumbled in the jungle and chooses to return to Cleveland after a fourth straight trip to the Finals.

I love the NBA season no matter what. I loved it when Playoff time meant Dale Davis and Rik Smits sweating against Charles Oakley and Patrick Ewing in a 79-75 Playoff game that somehow passed for entertainment. But I want Derrick Rose at 100 percent so the season is not merely another slick Hollywood epic starring the Miami Heat, with the suspense lying not in the result but the execution. I want the rise of DRose so the Bulls can face off (we can hope) against the Warriors and Steph Curry in the NBA Finals. Count me among those who were relieved that DRose didn’t come back early and resisted the pressure to rush back. But now that his body is right, we will see about his mind. This is uncharted territory. For the good of the game, we should all hope he finds his way.