Derrick Rose Has Rather High Expectations 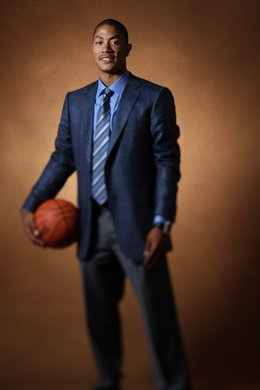 In all likelihood, Derrick Rose will be picked first overall by his hometown Chicago Bulls in tonight’s draft. For a Chi-Town kid, you’d think that would be a pretty good accomplishment, one to be particularly proud of as he begins what is sure to be a thrilling career. Nope, Rose has much loftier goals.

Forget about the Rookie of the Year award, try the MVP!

Derrick Rose said one of his goals for his rookie season is to be MVP of the league. He knows that talk is a little crazy. But he’s also not going to give it up.

Asked what kind of player he expects to be in the next five years, he said: “Not a star, but like, a superstar. Something around, like, Chris Paul, Kobe Bryant, LeBron James, Kevin Garnett, Paul Pierce, something like that.”

To be sure, the young man is not short on confidence. And everyone associated with the Bulls has got to love that.

Well, everyone but Kirk Hinrich that is…