A healthy D-Rose only makes things better for Chicago, and King James' triple-double gets Cleveland its first home win. 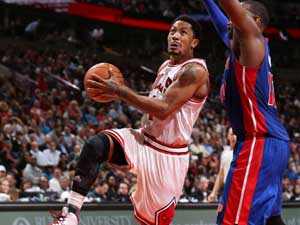 Coming into the Q last night, LeBron James had an IOU due to the Cleveland fans.

Can’t wait to get back on our home floor and see our fans Monday night. By the way I owe y’all one. #TheLand #StriveForGreatness

By the time fourth quarter buzzer sounded to officially end the game, his IOU was paid, thanks to his triple-double (32 points, 12 rebounds, 10 assists) resulting in the Cavs’ first home win this season.

Kyrie Irving (32 points and 9 assists) and Kevin Love (22 points) had big performances for the Cavs as well. Love was hot from the arc, hitting 6-9. Anthony Davis (27 points, 14 rebounds) and the Pelicans couldn’t stop the Cavs and will look to get their next W in the comfort of their own home against the visiting Lakers.

It’s easy to get used to losing when you stack up six consecutive Ls. But Indiana had enough. Roy Hibbert (29 points and 5 rebounds) and the other eight available Pacers finally broke the curse with last night’s home win over the Utah Jazz. Gordon Hayward (30 points and 8 rebounds) had a nice game in his hometown—plus a haircut and pizza from local favorites—to keep the Jazz close throughout. But after scoring 13 points in the third quarter alone, the Pacers weren’t about to allow more last-minute heroics from Hayward. They held him to 4 points and closed out the game for their second W of the season.

The New York Knicks hoped to avenge themselves at home when the Atlanta Hawks came to town for the two teams’ second straight match-up. Things didn’t go quite as planned, and the Hawks walked out of MSG with another win over Carmelo Anthony (25 points, 9 rebounds, 7 assists) and the Knicks. While the teams’ numbers remained close throughout in terms of points, rebounds, fastbreaks, and even turnovers, the timing wasn’t perfect for the Knicks. Plus, Atlanta’s second-year man Dennis Schroder had another career night over New York with 14 points, breaking his Saturday night’s high of 11. Schrodsanity?

Now recovered from sprained ankles and once again in the Bulls lineup, Rose (24 points and 7 assists) played a game that made Chicago fans—and NBA fans across the world—smile. Except for Pistons fans, probably. Rose and the Bulls gave Detroit a pounding last night, going up by as many as 19. Pau Gasol (17 points and 15 rebounds), Joakim Noah (13 points, 14 rebounds, 6 assists) and Jimmy Butler (19 points) all finished the game strong for the Bulls. Double-doubles for Detroit’s Greg Monroe (16 points and 10 rebounds) and Josh Smith (19 points and 11 rebounds) weren’t enough for the Pistons, as they acquired their second consecutive loss. Andre Drummond had an interesting night as well—not in the box score, but on his back…his name was misspelled on his jersey in the beginning of the game.

Mr. 2014 Finals MVP, Kawhi Leonard, had another MVP-caliber night in the San Antonio Spurs’ road win over the Los Angeles Clippers yesterday. He recorded a double-double (26 points and 10 rebounds), which included a timely lay-up off a feed from Manu Ginobili in the fourth quarter to get the Spurs their first lead with less than two minutes remaining in the game. The Clips in the fourth were a different story. Their last successful field goal came from Chris Paul (12 points, 10 rebounds, 9 assists) with 5:49 left in the 4Q, and costly turnovers from Blake Griffin (23 points, 10 rebounds, 6 assists) led to the Spurs converting on the other end of the floor and earning their first road win of the season.