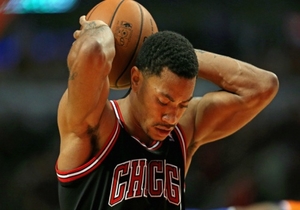 The Chicago Bulls’ season turned into a nightmare on Friday night in Portland — Derrick Rose hurt his right knee on a backdoor cut, and he will undergo surgery today in Chicago to repair a torn meniscus.

“We’re the Chicago Bulls,” head coach Thibodeau said. “We have one goal and that’s to win. I believe we have the personnel in that locker room to get it done. We know we don’t have to change our style of play. We’re built on defense and rebounding.” Rose will need similar resolve and determination to overcome his second lengthy rehabilitation process in 19 months. Thibodeau said how long Rose is out won’t be determined until (team physician Brian Cole) performs the surgery. But two sources close to the process indicated Rose and other decision-makers want his meniscus reattached. While this is better for Rose’s long-term career, it also means a lengthier rehabilitation process of up to six months or more. That would mean Rose would miss the rest of the regular season.

“We’re hoping for the best,” Thibodeau said. “We, of course, feel very badly for Derrick. I talked to him at length (Saturday) night. He’s in good spirits, about as well as can be expected under the circumstances. And he’s already thinking about his rehab. Typical Derrick, he’s concerned about his team, his teammates. He’s such a great teammate along with being a great player. That being said, we can’t feel sorry for ourselves.”

Similar to last season, Thibodeau will push these Bulls to the limit, and get absolutely everything possible out of them. But even the most optimistic of fans must realize that the team isn’t going anywhere without its leader.

The bigger concern for the organization and its supporters is Derrick Rose’s future.

After playing in just 11 games this year (and 50 overall the last three seasons), the 25-year-old must reach deep down, and find the resolve to make yet another comeback from two major knee surgeries in the span of 19 months.