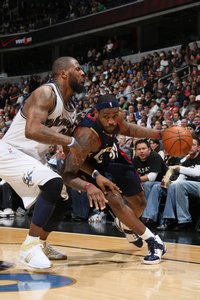 At this point, I thnk it’s pretty fair to say that DeShawn has figured out the self-promotion game. He does, after all, play with a guy who’s mastered the art.

For such a mediocre player, Stevenson has gotten quite a bit of attention from the press this year, and it doesn’t look like it’s going to stop anytime soon.

Stevenson responded to LeBron comparing him to the rapper Soulja Boy, and poked fun at James’s friendship with S. dot Carter.

“I hope we play Cleveland. I’m going to get Soulja Boy courtside seats and have him wear a DeShawn Stevenson jersey. Maybe (James) can have Jay-Z there since LeBron’s all on his (shorts) anyway. And tell LeBron to cut that beard off and stop copying me.”

This is so silly, that I don’t even know where to begin. Regardless, here are two observations: 1) LeBron will most likely get his career high in points (and perhaps every other statistical category) next time he goes up against the Wizards; 2) DeShawn apparently has a patent on beards.