Did Baron Davis Get Paid to Be Fat? 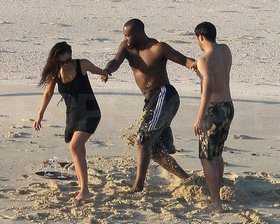 Back in September, Baron Davis famously admitted to going on the Jenny Craig plan in order to shed some weight for the upcoming season. Well, it appears now that there may have been financial motivation behind the revelation.

Baron, it seems, might have pocketed himself some nice coin for eating fatty foods over the summer. So sayeth the NY Daily News (See: sidebar):

The Clippers’ Baron Davis is getting paid $250,000 for endorsing a weight-reduction drink. The Clippers privately say that the weight Davis gained to do the endorsement accounted for his slow start.

Having signed him to a five-year deal with $62.5 million guaranteed, you can see how they’re not very thrilled by that.

Celebrities are asked to gain (or lose) weight all the time, normally for movie roles that pay them tens of millions of dollars. The 29-year old Davis – who was already hefty by League standards – reportedly gained weight for a quarter of a million bucks. Awesome.

The Clip (Horror) Show, at 4-16, is currently last in the Pacific division. But thanks to Jenny Craig, their point guard has a terrific figure!