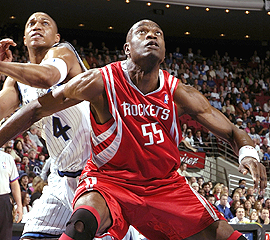 Dikembe Mutombo, the (allegedly!) 41-year old center, will be back in Houston for one more season. The Rockets are expected to pay the ancient big man just under $2 million for his services.

“I will probably sign,” Mutombo said Wednesday night at a reception for Basketball Without Borders, the NBA outreach program that is in its fifth year of assembling the top 100 African prospects. “I just need one more phone call. (Rockets owner) Les (Alexander) and I need to squeeze out one or two more things.”

Yes, you are a very old guy. But, somehow, you continue to be a productive ballplayer.

Last season, Deke averaged 6.5 boards and blocked 1 shot per night. In January, he became the NBA’s second leading shot blocker of all time (he’s about 600 blocks behind Olajuwon). Historians believe that the record he holds for most teammates hit with elbows will never be broken, let alone approached.