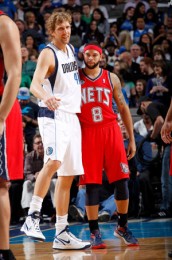 Despite their reportedly slim chances to ink Deron Williams, it’s no secret that the Dallas Mavericks desperately want to land the superstar free agent point guard.

Dirk Nowitzki continues to lead the charge on the recruitment front this offseason. The Dallas Mavericks’ forward tells KTCK-AM (via the Dallas Morning News) that DWill would be a perfect fit in Texas:

On NBA free agency: “I’m anxious. We’d love to get D-Will (Deron Williams) in here. That’s no secret. If you look at the league now, if you look at those top teams, they all have two or three playmakers you can hand the ball to and they do their thing. We just need to get better. I think we have some question marks going into the summer. We signed Rick (Carlisle) for four years so we got that out of the way. Now, it’s time to get some players in here and get better. I always said we’re not happy losing in the first round. We feel like we need to compete every year at the highest. We’ll see what happens.”

On if he knows Deron Williams: “I know him. I obviously competed with him in the All-Star game. That’s really the only time you get to spend a little time off the court with somebody. When he played in Utah, he was in the West so we were in same locker room a little bit. He’s a good dude. He’s a competitor. He’s one of the one of the best point guards in this league. He’s athletic. He can shoot. He can get to the basket. He can pass. He’s a great all-around weapon. We’d love to have him run the show here. We’ll see what he decides. I hope we have a good shot. He’s from here. His mom lives here. He likes it here. He loves golf, and we have great golf courses. We have a great organization, great fans, and a great owner that makes stuff happen all the time. I really think we have as good a shot as Brooklyn has.”

Meanwhile, on Twitter, Delonte West enthusiastically put the call out for Deron Williams to take less money and join the Mavericks, this despite Delonte’s own uncertain future in Dallas.