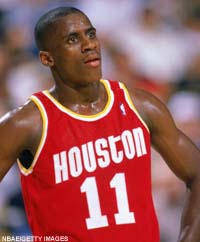 This piece—or a variation thereof—may have run in SLAM 10. I don’t have a copy on-hand to check, but a search of the archives revealed a Vernon Maxwell piece in there. Anyway, given the time of year, I thought it was worth revisiting. You’ll see.

The first official NBA event I ever attended with a SLAM credential was Sixers training camp in October of 1995. They held camp at the University of Delaware (for the first and only time, I believe) that year, and as a recent graduate I was still living in the area. Jerry Stackhouse was a rookie, and Shawn Bradley, well he was already Shawn Bradley. One of my strongest memories of camp was Bradley tripping over the midcourt line during a scrimmage—and the entire crowd laughing at him. This did not bode well for his future in Philadelphia.

It was a dark era for the Sixers, the short period after Barkley and before Iverson. John Lucas was the GM and the coach back then, and he filled out the roster with reclamation projects, most noteably Richard Dumas (who had been a teammate of Barkley’s in Phoenix) and Vernon Maxwell. Mad Max. A supremely talented guard, Maxwell already had a bit of a reputation. This is a guy who, after taking two weeks off from the defending champion Houston Rockets in 1995 for “personal problems” announced afterwards that he’d just needed a vacation. He wound up in Philadelphia shortly afterwards. And there, even in the preseason, Maxwell lived up to his nickname:

We’re in the locker room at Sixers training camp and Vernon Maxwell is talkin’ football. It starts with a perfectly innocent question about Eagles’ running back Ricky Watters, one thing leads to another, mainly “Hawk,” V-Max’s high school football nickname, and the next thing you know Vernon’s talkin’ about trading his high-tops for cleats. The following surreal exchange takes place:
•
“I might try out for the Eagles next year”
“Are you serious?”
“I’m serious, I want to try, at least.”
“As what?”
“Free safety.”
“Would you quit basketball to play free safety?”
“Nah, I just wanna get a shot before I get too old.”
“When was the last time you played free safety?”
“My senior year of high school, I had opportunities to go to college — what y’all fail to realize I was first-team All-State defensive back in Florida coming out in ‘88. I was recruited by Florida, Florida State, Auburn, Kentucky, you know LSU, all the SEC schools. I just didn’t go. I just thought I’d have longevity playing basketball.”
“Do you watch free safeties a lot on Sundays?”
“I like cornerbacks and safeties, that’s my favorite position.”
“Can you have played both at Florida?”
“Yeah. I got asked to play both, but … ”
“How long would it take you to re-acclimate to that game?”
“I would need just a summer. To work out. If I just worked out with a team, I feel like I’d be OK. I just wanna give it a shot.”
“Just to prove to yourself you could do it.”
“Just to prove to myself I could do it … I know I could do it.”
“Do you want us to call [Eagles head coach] Ray Rhodes for you?”
“Call Ray Rhodes and tell Ray I need a shot, I want a shot next year. I mean it, too. I’m serious.”
“Have you ever talked to any coaches?”
“I was gonna go to the combine, and work out.”
“You mean coming out of college, or recently?”
“I was in the NBA, but it was gonna be like I was a rookie. My agent was gonna set me up with a chance to go to the combine and work out for the NFL.”
“How recently was that?”
“About three years ago, but then the Rockets were like, ‘Naah, I don’t think so.’”
“If you went to do that, would you have to be Mad Max again?”
“Yeah, I’d have to be Mad Max. I’d have to be crazy to do that, yeah.”
•
Six-foot-eleven center Scott Williams, changing at the locker next to Vernon, is listening in. “I’ll be a long punter for the Eagles,” he says. “the way I kicked that one yesterday.” Williams did boot a high, hard one over the bleachers after a blown play that came within a thin sheet of plexiglass of wasting a cameraman. Knowing the Eagles needs at tight end, I ask power forward Clarence Weatherspoon (6-7, 240) if he’s ever thought about playing football. “No, man, I haven’t thought about playing football.” “Why not?” “Do they get guaranteed contracts?” “Uh, no.” “That’s why.”

The Sixers went on to go 18-64 that year, and Lucas was fired. Philly got the first pick in the ’96 Draft, which they used on Georgetown guard Allen Iverson. Unfortunately they didn’t do much better in their first year with Iverson and new coach Johnny Davis, finishing 22-60 in ’96-97.

That was it for Mad Max in Philly as well. He went on to play five more seasons with seven different teams, finishing up with a 24-game stint back in Philly in ’00-01. The Sixers went to the Finals that year, but the 35-year-old Maxwell wasn’t on the playoff roster. And he never did play a down for the Eagles. (Although oddly enough, another Vernon Maxwell DID play in the NFL around the same time. Not the same guy.)

Maxwell’s been out of the League for over seven years, but he stays in the news. In August of this year, he was jailed on a probation violation. Unfortunately for Mad Max, this was nothing new.