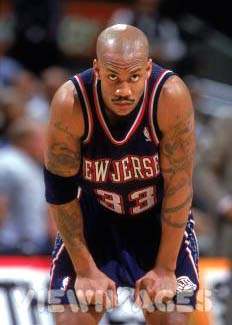 The year was 1999. I had just inherited the mantle of SLAM Ed from Tony Gervino, and I had a great idea for a split cover. (Because setting up one cover isn’t complicated enough.) The concept was “Double Platinum,” featuring All-Star caliber duos from East and West. Out West, we had a pair of Kings: Chris Webber and second-year point guard Jason Williams. And in the East, New Jersey’s finest, Keith Van Horn and the freshly arrived Stephon Marbury.

The shoots, they went off without a hitch. It was the basketball that presented a problem. You see, the Nets looked great in the preseason, then fizzled out once the games actually mattered. I can’t remember exactly what their record was starting out (I could look it up, but it’s too depressing), something like 1-10. There was no way we could justify putting Van Horn and Marbury on the cover, not if we wanted to maintain any credibility at all. So Webber and Williams went worldwide, and Van Horn and Starbury had to settle for a mere feature. We all know how it turned out in the end. (Um, not that Williams and Webber ever won anything either.)

This first interview with Steph took place at Madison Square Garden, following the Nets first pre-season game. They absolutely torched the Knicks that night, with Marbury and Van Horn combining for 50-plus. (And remember, the Knicks were coming off their last Finals year.) Things were looking good for the Nets.

SLAM: You were pretty much in mid-season form out there. Feelin’ good?
SM: Yeah, I’m goin’ out playin’ my game man. I finally got into a situation where I could just go out and hoop without nobody lookin’ over my head. I’m just out there hoopin’, playin’ my game.
SLAM: You feel better with the contract out of the way?
SM: Yeah, yeah. I mean, that really didn’t matter because I already knew what it was gonna be as far as what you could get—it was only one set salary. Just signin’ and getting it over with is good, but I’m just happy that I’m where I want to be. This is the best place in the world for me.
SLAM: Did you play a lot of basketball this summer?
SM: Yeah, I played a lot of basketball this summer. A lot.
SLAM: So how about playing with Keith? How does he compare to Kevin?
SM: I’m not talkin’ about that, man. That’s over with. Playin’ with Keith is lovely, man, it’s another threat, inside and out. He can shoot the ball, take you off the dribble, post you up—he can do everything. He’s a better low-post scorer than a lot of players in the League because of his quickness.
SLAM: And you’ve already got the two man game running, you both can fill it up. We saw that behind-the-back bounce pass in the fourth.
SM: I just threw it too fast. It was just a little off-timing.
SLAM: Feel like you got a good chemistry already?
SM: We gettin’ it. We gettin’ it. We gonna get it down even tighter, to where the two-man game is gonna be crazy.
SLAM: So how do you feel about this year?
SM: Just tryin’ to win games, man. That’s it. Just tryin’ to put up W’s. That’s all I want to do is win. Whatever it takes to win, that’s what I’m gonna try to go out and do.
SLAM: And get back to the playoffs, right?
SM: Yeah. Oh definitely, definitely tryin’ to get to the postseason. That’s a definite.
SLAM: How’s it help having guys like Johnny Newman?
SM: Havin’ vets around is great, they tell you the little things like you need to know. JNew was tellin’ me yesterday, ‘just go get up a couple of shots before you go out on the court.’ And ‘yeah, you right, I should go get some jumpers up.” And I went and got some jumpers up, and my jumper was pretty clickin’ tonight.
[Steph got some new ink—his daughter’s name, Xaviera Kenae Marcia w her birthdate. ‘Jamel Thomas 5:30’ in elbow on the other arm]: “I’ve got all my brothers and my sisters and my mother’s and father’s names coming out of a pen, and I got a cross for God, a ball for hoop, and a dollar sign for money.”
SLAM: Gonna get more?
SM: No, I’m done, I’m done. [2007: Yeah, right!]
SLAM: You want to lead the league in scoring this year?
SM: Do I want to? If it’s for me, then I’m gonna do it. I could lead the League in scoring and assists, easy.
SLAM: Scoring and assists?
SM: Yeah, definitely. That’s my goal.

And just a couple more excerpts, from two separate convos in Jersey about his move out of Minnesota. Funny how he STILL hears about this sometimes—I thought he explained it pretty well EIGHT YEARS AGO:

SM: Being close to home, the organization—it’s a whole other here. It’s not even close, man. I mean, people in Minnesota were great, everybody in the front office was cool, but being here is like, it’s more of a New York flavor style, you know? People are different everywhere, and I’m just more used to bein’ around the people in New York, the Tri-State area.
SLAM: What’s the biggest difference?
SM: Just the conversation. Out there, it’s like you talk about what you gotta talk about. Out here, you could end up sittin’ down in the office for an hour and talk to anybody, know what I’m sayin’? I’m outgoing, I never really got a chance to be myself there. I didn’t like Minnesota at all. It was too cold—basketball was lovely though, I loved playing basketball there. The arena was great, the people there were real supportive, but bein’ here, it’s like night and day, it’s like night and day man. Hoopin’ is different, it’s a better atmosphere…

SM: The situation wasn’t basketball no more, it was my life. I don’t love basketball more than I love myself. People can’t realize that. Kevin McHale said, ‘guys are greedy now,’ and I was gonna get the same thing [in New Jersey that] I was gonna get in Minnesota. If I had a choice of gettin’ the same thing and playin’ home as opposed to playin’ there where I don’t wanna be, how can you get mad at me, how can you criticize that, when you live there, and you’re from there. You know, he’s home! You know what I’m sayin’? How can you get mad at me? Just look at the picture. You get mad at me because I wanna go home, you’re callin’ me greedy and tellin’ me I don’t love the game, but I’m gonna get the same exact thing I’m gettin’ in New Jersey, no different. And I get to be home. You weigh it out, you tell me.