Do It For The Culture 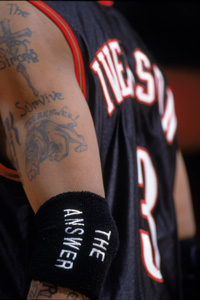 A lot of people might try to tell you that the most important important person in the League since Mike is LeBron. Or maybe Kobe. DWade, KG, or Melo perhaps? Bottom line is they’d be lying.

No, the most important person to the L post-His Airness is AI — Allen Iverson. And this has nothing to do with stats, or wins and losses, or the fact that he’s the best scorer sub-6-feet ever. Nor is this isn’t about him as a person, his recent demise or possible return. This isn’t about AI vs. The League, per se, either.

This is simply taking a critical look at what Mr. Iverson did to the world.

Quite simply, no player has come close to having the cultural impact AI has had. Looking back on his career after hearing of his possible retirement, as gaudy and impressive as his numbers are, they don’t him the least bit of justice when assessing his true value.

What’s more important is the influence he’s had on the culture — how we act and think everyday. NBA culture and, more significantly, American culture.

On the NBA tip, look at the rule changes he brought about. Namely the attention that began being paid to the crossover — by refs and players. For refs, the carrying call started being enforced more than ever. People had seen supreme crossovers before, of course. Until, Iverson, Tim Hardaway’s version was the deadliest we’ve known to man. But it was AI’s signature, shoulder high edition that caused the League and the Zebras to blow the whistle. From that point on, every other player that used the move in the same way, Steve Francis, Steph, Larry Hughes (remember he was supposed to be the second-coming of AI? Not quite, huh), etc., were all forced to tone it down. Kind of ironic, because for hoopers, Iverson brought a whole new life to the crossover. One that players from Small Fry to the League would try to emulate and master.

So as players were adding a new element to their game, the game was simultaneously attempting to put a cease and desist on it.

See the League was fully aware of the magnitude of his cultural impact. They knew how many people he had a hold on. And they couldn’t just have somebody, with that much power, teaching all these kids and grown men, a move that, when done properly, could leave one on the wrong end of a SportsCenter highlight. It was too flashy. Did it actually break the rule? Sometimes. But the enforcement was more about trying to submerge something before it became an epidemic . And because AI was the leader of the movement, he had to be stopped first before the rest of the people could be expected to do the same.

And don’t forget about the implementation of the zone. Shaq was predominantly responsible for that one, but AI deserves some credit, too. I mean, no one could keep him in fro

nt. Not Mike, not anybody. If that’s not enough proof, Jadakiss said it and he’s top 5 dead or alive. That counts for something, right?

Or how about that dress code? This may be the grandaddy of them all in terms of how he’s affected the League itself. Now AI was not the only player coming to games in throwbacks and chains. That was widespread. But he was certainly the most visible ad, and he damn sure was a main target of the League’s ban on jerseys, jewelry, Timbs, hats, etc. I’m not here to pass judgment on whether “the code” and its origin were right or wrong, or discriminatory or whatever. That’s whole ‘nother article. But the rule was made, end of story, and taking it for what it is, there’s no denying the direct correlation between Iverson and the rule.

See the League was fully aware of the magnitude cultural impact, that’s why they had to tame him. It was like he was too powerful. Kinda Malcolm X-ish. Can’t have somebody inciting people to revolt against The Man. In AI’s case, the NBA just couldn’t have somebody with so much influence on the people doing what he wants. Especially if its unreservedly contrary to their best interests. He was a cult leader to them.

So the Du-rags, baggy clothes, and everything else my man Bryan Crawford touched on (dope article, by the way), had to go.

As he said, one could take a trip to, “Anyhood, USA back then and you could see the impact that he had on the people.”

And this is the most significant mark of AI’s career. His numbers are tangible, his behavior controversial. But Like Mike, the everlasting impact he would have on an entire generation of ballers and general public is too immense to ever be measured. He too, would have millions of people mimicking his every move. Though MJ was, no doubt, a larger global icon, the mere strength of their influ

Mike went bald, stuck his tongue out, shot fadeaways, and people mirrored his every move. AI had his headband and braids, and tried to tap fools every rep and the everybody followed suit. Not to mention the arm sleeve. You know, the one your mans would wear despite having no clue what the hell it actually did.

He’s a large part of the reason we have media outlets like SLAM.

He pioneered the streetball heatwave that took place in the early ’00s. Without his swagged out play, AND 1 mixtapes and Nike Freestyle commercials would have never come to national fruition.

“I ain’t crossover I brought the suburbs to the hood, made ’em relate to your struggle, told ’em bout your hustle” – Jay-Z, Come And Get Me.

He completely merged the worlds of basketball and hip-hop. Mike’s career coincided with the rise of hip-hop. But AI embodied it. The man was a living music video – no facades. He could have been saying “I am hip-hop” WAY before Wayne. He even tried his hand at it. Shaq might have been the first, but AI put the parental advisory sign on it.

He made Kobe think he had to rap to be cool, too.

And the tats? C’mon.

If this isn’t enough proof, take a look at the League now. Mike wasn’t tatted up, but LeBron is. Why? Mike didn’t wear headbands, but Melo does. Why? And those arm sleeves are as ubiquitous as ever. Why?

The Answer is The Answer. The guy that, as my man Phil Gary

The League is actually comprised largely of players who grew up seeing, watching, and hearing about AI. His impact is still going strong. Even if he’s done playing, (which he’s not) to a certain extent, it doesn’t matter. His influence is out there. Way out there. Directly or indirectly, and it can’t be curbed. It ‘s too high to get over, to low to get under. And that’s something that will never have to worry about being in a starting lineup or signing a contract. There’s no rule that can stop that.