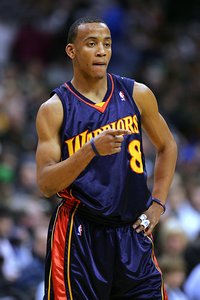 They do not, according to Marcus Thompson II of the Contra Costa Times.

Ellis, whose ankle injury is expected to sideline the explosive guard for three months, shocked the League last week by announcing the injury just one month after signing a massive extension with the Warriors.

According to one published report, the Warriors aren’t buying the details surrounding the injury:

According to team sources, the Warriors have questions about the explanation Ellis gave them regarding how he sustained the injury. The team has launched an investigation, dispatching athletic trainer Tom Abdenour to Jackson, Miss., to take a look at Ellis.

Team officials, according to one of the sources, are skeptical about Ellis’ explanation of how the injury occurred because of its severity.

The San Francisco Chronicle, however, doesn’t agree with Mr. Thompson’s report, stating that the Warriors’ trainer could not “investigate” Ellis’s injured ankle since he’s on a different continent at the moment.

Though this is certainly something to keep an eye on, it goes without saying that the chances of the Warriors doing anything drastic to their most valuable asset – say, fining or suspending Ellis, or worse yet, voiding his new contract should he be found in violation of its terms – are slim to none.