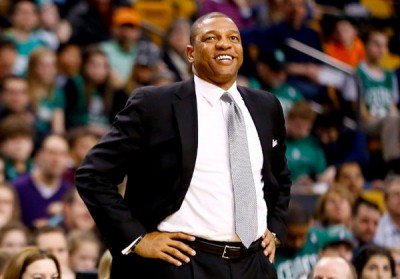 After weeks of stalled negotiations, which left hurt feelings on both sides, it appears that Doc Rivers has finally decided to leave the Boston Celtics for the LA Clippers.

The C’s 9-year relationship with the popular head coach is over, and pending League approval, Rivers will be pacing the sidelines in Los Angeles next season.

Per the Boston Globe and Herald:

Rivers, who was the second-longest tenured coach in the NBA behind San Antonio’s Gregg Popovich (17 seasons), was under contract to coach the Celtics for three more seasons, during which he stood to make $21 million. But in a deal that was agreed upon Sunday night, the Celtics will let Rivers, 51, out of his contract in exchange for a 2015 first-round draft pick. Though Celtics center Kevin Garnett was involved in previous incarnations of this deal, he is not involved in the current package.

Rivers, who had left Boston for Orlando in frustration Friday, convinced that the deal was finally dead, now gets his wish to coach a team with a much brighter future than the Celtics. But the source said that as of last night, Rivers had yet to finalize a contract with Donald Sterling, though the Clippers owner is reportedly willing to offer Rivers a five-year deal worth $35 million – the same contract he signed with the Celtics two years ago. Indeed, the word “dead” became the most commonly used term to refer to the dealings between Ainge and Clippers owner Donald Sterling, whose unpredictable reputation still had the Celtics on alert tonight, despite finally having an agreement in place.

This is a major coup for the Clippers, as the hiring of Doc Rivers not only secures one of the NBA’s best coaches, but also likely guarantees free agent superstar point guard Chris Paul’s return. As for the Celtics, their immediate future is uncertain if not bleak.

Rivers finishes his tenure in Beantown with a 426-315 regular season record, and went 106-59 in the Playoffs, the second most postseason wins for a Celtics coach behind Red Auerbach.