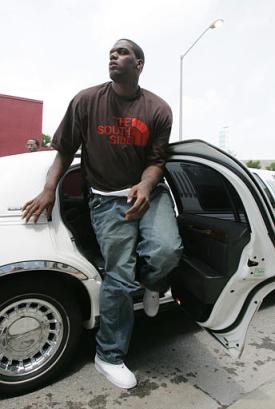 So, word out of the New York media today is that Isiah Thomas knows exactly what Eddy Curry needs to do to become an All-Star. And it’s so simple. All he has to do is change his entire personality!

That’s right, boys and girls. All that’s separating Eddy Curry from the Shaqosphere and beyond is an attitude. Anger. A bunch of other emotions that Scoop Jackson would refer to in more one-word sentences. Eddy needs to get mean, and fast. Stop getting pushed around and become the one doing the pushing.

Don’t get me wrong—this sounds great. And I’m sure that Dennis, Rick, Bill and several of Zeke’s other Detroit teammates would agree. Big and cuddly gets you endorsements. Big and mean gets you championships. (Big and both makes you Shaq, and there’s already one of those.)

But herein lies the rub. I don’t think Eddy can do it. And moreso, I don’t think Eddy WANTS to do it. And why should he? He already signed a $60-million-plus extension playing softer than Barney, why change now? He’s still soft in the middle (take that both ways, please), still commits atrocious offensive fouls and, despite the occasional 25-15 game, still looks at times like he just learned the game last weekend. And it’s no longer a question of whether he’s in shape (and get ready for another Scoopism here), it’s a question of what shape he’s in. Usually it’s sort of round. And, barring injury, he’s gonna make $100 million in this game no matter what. Why not take the easy road?

Some guys don’t look at it that way, of course. I’m convinced that KG and Kobe (just to name a few) would play the same way whether they were making $10,000 a year, or $10,000 an hour. All-Stars already, they’re constantly seeking ways to improve their game, because their overwhelming desire is to be the best players ever, not just to buy fur coats and Ferraris. Unfortunately, with the way salaries work nowadays, some players don’t even seem to enjoy the game anymore—they’re just in it for the loot. For now, Eddy has done nothing to make me believe he’s in that first category.

I can’t wait for the regular season to start.