Does Greg Oden Have Mono? 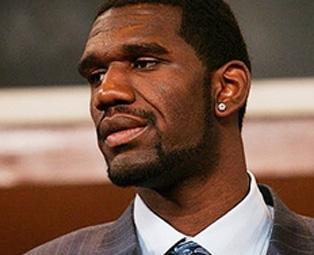 -Some doctor thinks that Oden has all the classic symptoms of mononucleosis, and his words should scare the living crap out of any self-respecting Blazer die hard:

“From what I have read, and based on 30 years as a primary care physician, Greg Oden has mononucleosis. His history and sypmtoms are classic: sleeping all the time, fatigue, 19yo, girlfriend, overstressed, very swolllen tonsills. I have never seen tonsillectomy recommended for mono. It would be dangerous.”Somehow the Blazers have invented a new treatment for his condition, tonsillectomy.

I have never seen this procedure recommended for acute mono syndrome or, for that matter, acute tonsillitis. Surgical removal of the tonsills in either condition could result in disaster.”

(Settle the hell down, doc! Also, learn how to spell.)

-Reportedly, the Lakers and Derek Fisher are working to hammer out a 3-year deal starting around $5 million.

-JJ Redick is looking to put last year’s disappointing rookie season behind him.

“You can’t really make up for last year. You just have to move forward,” assessed Magic General Manager Otis Smith. “It’s like sleep: once you lose it, you don’t get it back. He doesn’t get that year back.”

(I don’t know why, but I enjoyed that quote tremendously.)

–Good Q&A with World B. Free and Willie Green in the Philly Inquirer:

“Guys were smoking cigarettes in the locker rooms, at halftime. When me and Darryl Dawkins were rookies, we were in Indiana playing the Pacers, and they were kicking our ass by 30 points. So everybody walks into the locker room at halftime and one guy opens up a Schlitz and another guy lights up a cigarette. I said, “What the…?”

-Doug Collins thinks Grant Hill will thrive in Phoenix. The former coach believes G-Hill would have gone down as an all-time great had his career not been plagued by injuries.

-One guy who’ll benefit greatly from the salary cap is LeBron James.

The numbers show James will earn about $43 million in the next three years, starting with a salary of about $13 million this season with annual raises of about $1.4 million each year.