Does LeBron make his teammates better? A case study 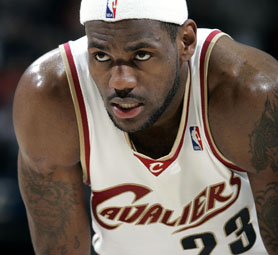 Last night, with LeBron going vesuvius for 41, 8, and 7 in the land of Pistons, we WITNESSED what he his capable of being. The dominant force in the NBA today, let alone the future. He has this in him, when he goes out and gives the maximum effort. The thing is, he has admitted to coasting this season, and the 40+ night was his first of the season. I know it’s tough to be disappointed in someone for not scoring 40 more often, but we have to expect more from LeBron or else he will get by coasting for his whole career. That ain’t cool. LeBron has the talent and intelligence to put up a 35-15-10 season one day, and that’s being conservative. With the Spiderman 3 trailer making the rounds, the line fits for LeBron “With great power comes great responsibility.” He is the future of basketball and he owes it to US to take the game to a higher place. That not only means putting up bananas numbers, it also means winning and making teammates better, like all of the great ones do.

With that in mind, I thought I’d go back through his NBA career and search for an answer to the question, does LeBron make teammates better? Here is a look at some of his more notable teammates, and what the impact has been for them pre and post-Bron. I stayed away from statistics for this study, and instead relied on a more Barkley-esque approach of using sweeping generalizations. Enjoy my search for the truth.

Big Z – One of the better centers in the NBA before LeBron. He had already established himself as a capable NBA scorer, and if you can remember the pre-LeBron Cavs (I can not), he was as close to a franchise player as anyone on the team. With LeBron by his side, Z has maintained, but he hasn’t gotten any better. He is what he is, a slow plodding center in a league that’s going away from players like him. Shouldn’t the extra attention that LeBron draws give him countless one on one chances to dominate? Not happening. Verdict: Same to worse.

Carlos Boozer – He was very good in his one year with young LeBron. Then he went to Utah, started out okay until the injury bug hit, and this season he’s better than ever. Give Deron Williams credit for that, but also he only got to play with the rookie version of LeBron. Boozer should have been the certified second option to go on long playoff runs with LeBron. Too bad he stabbed a blindman in the back. The fact remains, he is better now than he was with LeBron. Verdict: LeBron made him worse.

Ricky Davis – When LeBron arrived in Cleveland, Ricky Davis was the resident scoring machine. Remember the night when Rick was a rebound away from a triple double, so he shot at his own basket? That was my favorite bad basketball moment of the 2000’s. Ricky was a scoring machine on a horrible team. Bron came and Ricky couldn’t play with him and everyone thought he was crazy going away from someone with passing skills like LeBron. Ricky went on to reinvent himself as one of the best sixth men in the NBA in Boston and he has been pretty good for the T-Wolves without doing anything to remind us that he was once one of the biggest headcases in the league. He was better pre AND post LeBron. Verdict: LeBron made him worse.

Jeff McInnis – Okay, he was defintley made better by playing with LeBron. His days in Cleveland were the best of his career other than a stretch or two with the Clippers. The Cavs probably regret losing Jeff to this day. Where is he now, by the way? Charlotte? How has his post-LeBron career been? Non-existent. Verdict: LeBron made him better.

Lee Nailon – A quality scorer wherever he goes. Lee Nailon has always been one of those guys that can score whenever he wants to. Except for when he played with the Cavs. What happened? Verdict: LeBron made him worse.

Darius Miles – A lost cause either way, although he had his moments with Portland when he wasn’t, you know being Darius Miles. If Tim Thomas were a bigger disappointment, he’d be D Miles. LeBron is exonerated for this one. Let’s move on.

Eric Williams – Jason Kidd made him as good as he could be. It’s slightly unfair to judge that version of him against another. He was better with Cleveland than he was with Toronto, we’ll give him that. Verdict: LeBron made him better.

Drew Gooden – This is LeBron’s finest work. Drew was a promising talent with Orlando, but T-Mac couldn’t make him into a regular force. Now, with LeBron, Drew scores plenty of garbage buckets and collects a healthy share of rebounds. He is not your ideal second best player on a great team, but LeBron has turned him into someone with superstar numbers. Verdict: LeBron made him better.

Sideshow, Pavlovic, Newble – These are the LeBronnenites. This is what Danny Ferry, Jim Paxson, and Dan Gilbert have given him to work with. Good luck. And whatever happened to Ira Newble? He looked like Benzino and he played hard enough. Is he still around? The fact that any of these guys play reguarly on an NBA team is a testament to LeBron James being a superstar. Varaejo goes after rebounds and plays aggressive defense, and those guys will always have a job, but I’m still crediting LeBron with making him and NBA player. Verdict: LeBron makes them better.

Eric Snow – He was younger before he showed up in Cleveland. Can’t rally judge his fall off based on anything LeBron does. He should never have been starting for this team. Verdict: Father time made him worse.

Larry Hughes – Oh. This is a problem. Injuries got to him, but seriously snap out of it Larry. His signing was supposed to mark the dawn od a new Jordan and Pippen regime. Larry was an All-Star with the Wizards two years ago. He was the key to the team, even with Gilbert Arenas there. Since coming to Cleveland, he seems to be getting worse every day. If LeBron is getting doubled and tripled, Larry should be able to destroy anyone that tries to guard him. And he should be playing the passing lanes and among the league leaders in steals at all times like he was in Washington. None of this has happened. Verdict: LeBron makes him worse, and that is his biggest failure.

Flip Murray – Had a brief rennaisannce last season hitting big shots for the Cavs, but he was better with Seattle. Then again, he’s playing for another Flip and he’s not as good for the Pistons as he was for the Cavs. Verdict: Push.

Donyell Marshall – He was much better in Toronto. Pretty good in Golden State and Utah. Donyell has been better everywhere than with LeBron. Put it this way, people used to think he looked like Ludacris. Now they say he looks like Bubs. If that’s not falling off, I don’t know what is.

Damon Jones – He was once an elite shot maker, the third option on a Heat team that went to the seventh game of the Eastern Conference Finals. He was funny and likeable as Shaq’s sidekick with personailty. Now, he’s the most annoying personality in the NBA and if you surveyed fans, they’d like to punch him in the face more than any other player. Verdict: LeBron had ruined his life.

The conclusion is that LeBron is going to have to score 40 a lot more for the Cavs to make noise in the playoffs. The supporting cast is not going to take the pressure off him. He tried to make them better by reeling in his own game earlier this season, but that wasn’t working. It’s going to be Bron against the world in the playoffs again.