Don Nelson Has the Most Wins Ever 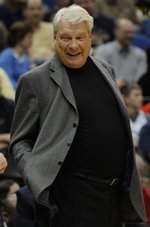 One of the most miserable record chases in NBA history came to an end in Minnesota last night, as Don Nelson notched win no. 1,333. He’s now one win ahead of Lenny Wilkens for the all-time mark. For the Warriors, it was only their 24th victory of the season.

For Nelson and his team, the record was more of a relief than anything else, as they celebrated in a somewhat subdued fashion following the game last night. Understandably, Nellie was in a reflective mood after setting the record.

The San Fran Chronicle has the details:

“Nellie hadn’t said one thing to us about the record. He just wanted to come out and coach and find ways to win some games with the people he has,” forward Corey Maggette said. “Until he got the record, he didn’t mention it. Then, he called us together and told us that he loves us.”

The on-court huddle included hugs for each member of the Warriors’ staff and roster and a dousing from a cup of water. The celebration, however, seemed forced in comparison with the emotion exhibited when Nelson tied the record with a one-point win at Toronto on Sunday. The best reactions Wednesday came behind closed doors, only the Warriors forgot to shut the locker-room door. They shook up cans of Mountain Dew and Sierra Mist and drenched the coach when he arrived from a courtside interview.

“When I was younger, I was a pretty tough coach and pretty emotional. I’ve tried to be less that and more Lenny Wilkens-like, and I think it has helped my career.” Nelson, who has always maintained that players win games and coaches lose them, seemed almost embarrassed to be passing Wilkens and would be comforted by not having the record very long. “There are plenty of guys close enough to break it, if they want to coach a couple of years,” Nelson said. “There are coaches who win them 50 or 60 at a time. They’re not like me, winning 20 at a time.”

Among active coaches, Nellie is now 145 wins ahead of Jerry Sloan for the record (with Phil Jackson and Larry Brown not too far behind.)