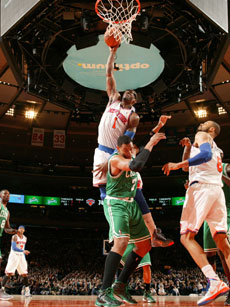 In some instances, time makes accomplishments more grandiose in everyone’s memory. Other times, the details of a person’s impact are forgotten and the recognition seems to fade.

Entering ‘10-11, the Knicks had come off a 29-win season and missed the Playoffs for the sixth straight year. The summer of 2010 became synonymous with free agency, as the season boasted an elite group of players on the open market.

The Knicks gave a $100 million contract to Amar’e Stoudemire, hoping the dynamic power forward could reinvigorate the franchise. From the get-go, Stoudemire did everything he was asked—and more. He set the tone by organizing workouts, showed up to cheer on teammates at summer league, and put the team on his back as the entire season became a push toward the Playoffs.

During his first year in New York, Stoudemire set the Knicks’ franchise record with nine straight 30-point games. His averages of 25 points, 8 rebounds and 1.9 blocks were unmatched by any other player in the League that season. Stoudemire was selected as a starter in the 2011 All-Star game, becoming the first Knicks player to start since Patrick Ewing in 1992.

Fast forward to the trade deadline, when the Knicks acquired Carmelo Anthony, the long-time face of Denver’s franchise. An elite scorer with seemingly endless range, Anthony quickly made his mark on the Knicks. But the question began to arise: Could Anthony and Stoudemire co-exist on the floor, and furthermore, would their games ever complement each other?

The Knicks finished with a 42-40 record, their first winning season since ‘00-01. Despite a first round sweep at the hands of the Celtics, the team was back on the map and ready to move forward. Stoudemire had brought them back, and Anthony was ready to propel them to the next level.

The ’11-12 season had a rocky start due to the lockout, as chemistry became an issue for all teams struggling to adjust to shortened training camps and a two-game preseason. In the 66-game season, Stoudemire played 47 games. The Knicks went 22-25 with him in the lineup and 14-5 during his absence. Anthony, who played 55 games, averaged 20 points on 40 percent shooting with Stoudemire in the lineup and 29 points on 49 percent shooting with him on the sidelines.

Questioning Stoudemire’s place in the rotation is valid, though unwarranted by anything that he has done. It just so happens that with Tyson Chandler at center, Stoudemire needs to play power forward. And that is where Anthony has excelled this season, so much so, that his name has been a staple in early MVP chatter.

As Stoudemire continues to gain playing time, it is important to remember the commitment he made to the Knicks when he arrived, and the standard he has upheld throughout his time in New York. Constructing teams is fluid and unpredictable, and as we’ve seen with the Lakers this season, names on paper do not necessarily complement styles on the floor.

Stoudemire has already proven his willingness to sacrifice upon his return from knee surgery. He has come off the bench for the first time since the ‘06-07 season, and has worked hard to fit seamlessly back into the rotation. The Knicks currently own a 25-14 record, second in the Eastern Conference.

Despite the constant swirling of rotation scrutiny, magnified by the New York market and the constant pressure to win now, Stoudemire’s presence has been largely positive for a once-struggling franchise. Upon his first game back, he was met with a standing ovation from the Madison Square Garden crowd. It was exactly what he deserved.