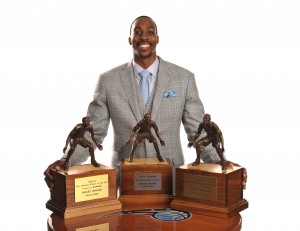 In the annual survey of the NBA’s general managers, Dwight Howard was voted as the League’s top defensive player. The Lakers’ big man certainly agrees with the GMs, and says he should have won the Defensive Player of the Year award last season.

The honor went instead to New York Knicks center Tyson Chandler. According to Howard — a three-time winner of the DPOY award — this was largely due to the exhausting Dwightmare that took place all season long in Orlando.

From the LA Daily News and ESPN:

The NBA’s annual general manager preseason survey touted Howard as the league’s best defensive player (60 percent overall) and best interior defender (66.7 percent). But the three-time Defensive Player of the Year sounded more miffed that the league handed the award last season to New York’s “I felt like I did my job to win. I also feel like I didn’t because of my whole situation,” Howard said, referring to his possible departure from Orlando.

“I was a little bit upset about that.” […] Howard said he is looking forward to adding his defensive ingredients to the new group of players assembled in L.A. “I’m happy now,” Howard said. “This year I get an opportunity to lead these guys on the defensive end and make those guys better defenders and also make them have more confidence in the team defense.”

Howard finished third in voting last season, behind Chandler and Serge Ibaka. He also missed 12 of 66 games due to injury, which was likely the biggest factor in him not winning the award.

With the off-the-court drama behind him now, Dwight has a chance to chase his fourth DPOY trophy, which would tie him with Ben Wallace and Dikembe Mutombo for the most ever.