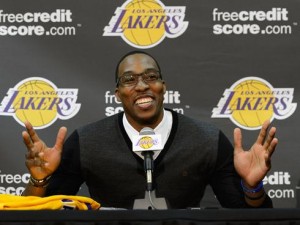 Dwight Howard’s history with indecision has been well (and painfully) chronicled. And despite his best efforts to avoid public criticism and scorn, it’s something Howard continues to struggle with.

Next summer, Dwight will be an unrestricted free agent, and he claims that he still doesn’t know what the future holds. For now, Howard is just happy and feels lucky to be living and working in Los Angeles.

“Coming here to play with Kobe, Steve, Pau, and Metta (World Peace) is the ideal situation for me,” Howard said. “All those guy are great players, and there’s something I can learn from each one of them, and hopefully I can blend right in with everyone. “I’m not going to come right out and guarantee that we’re going to win a championship. But I can assure every Laker fan out there that we will bring our “A” game with us every time we step onto the court.”

So, while DH12 has had a lot of time to rehab, get used to his new home city and think about the risk he took in forcing a trade, there’s one thing hasn’t changed in Howard’s life — he’s nowhere close to signing a contract extension with the Lakers. ‘I think the best thing to do is talk about it at the end of the year,’ Howard said. ‘We just went through that last season, basically, and I don’t want to go through it again or see anyone have to go through it. This is going to be my decision, and I’m going to wait till the end of the year. But I’m happy to be in L.A. This is a great place. I love the coaching staff and I love the organization for everything they’ve done for me since I got traded here. Hopefully I’ll have a long career here in L.A.”

Laker fans need not fret. L.A. can offer Dwight Howard the most money next summer, the team will contend for a championship, and above all, the big fella appears to be happy.

For the time being, all signs point to the Dwightmare mercifully coming to an end.