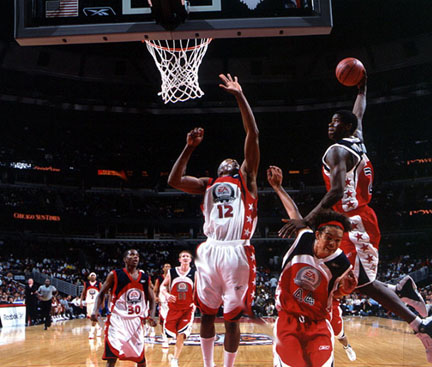 While working for SLAM over the last seven years, I’ve been able to see a lot of amazing things. From riding around Coney Island in a Rolls Royce with Stephon Marbury to being alone in a room last summer with five NBA All-Stars and hearing the most incredible stories I’ll never be allowed to write, my life has become a string of extraordinary circumstances that I keep discovering myself knee deep in.

Of all the memorable moments, one of the most fun days I’ve spent working for SLAM was back in the spring of 2004, when I went to Atlanta to write a cover story on Dwight Howard. Dwight had just finished his senior year at Southwest Atlanta Christian Academy and was rumored to be one of the top picks in the upcoming Draft.

At one point we went to the gym at Dwight’s high school to shoot some pictures, and the photographer asked Dwight to dunk a ball. Dwight did, and on the very first dunk he shattered the backboard.

It was awesome. I’d never seen a backboard break before. It sounded like a gun had been fired, and all of us there (Dwight, the photographer, Dwight’s cousin Kevin and myself) were immediately covered in a fine spray of glass. We stood there in silence for about five seconds, all of us shocked. Then we all started screaming and high-fiving each other, a combination of spontaneous disbelief and excitement.

Then Dwight’s dad showed up and asked who was paying to get the backboard fixed. That shut us up pretty quick.

Tonight the Orlando Magic were in town to play the Knicks, and I went to the game. It was a miserable affair (Russ took notes, which he’ll post later), with neither team able to execute anything resembling an offensive set nor put the other team away.

After the game, as Dwight was getting dressed in his locker, a cabal of reporters circled Dwight, waiting for him to talk to the media. Dwight spotted me across the room. You should understand that for some reason, Dwight swears SLAM is out to get him. He thinks we want to show photos of him getting dunked on as often as possible. As I’ve explained to Dwight numerous times, both in person and via our Sidekicks, that’s not our goal. We want to show anyone getting dunked on, not just Dwight. Dwight just seems to be in the middle of a lot of dunks.

Every time I talk to Dwight, he brings the conversation back to this topic, because he likes arguing and he knows I’ll give it right back to him. And tonight, even though there were about a dozen reporters on deadline waiting to talk to Dwight, all he wanted to talk about was getting dunked on. So we had this give and take across the locker room, with everyone listening in and waiting patiently…

DWIGHT: [his back to the reporters, getting dressed] SLAM magazine. Why do you guys always try to show me getting dunked on?

ME: Here we go again. Why don’t you stop getting dunked on and we won’t have to show so many pictures of it?

DWIGHT: I don’t get dunked on that much.

ME: You should see some of the pictures we’ve run.

DWIGHT: I’ve only been dunked on three times.

ME: In the last month?

DWIGHT: I’ve only been dunked on three times.

ME: Well, I know Kobe got you.

ME: And I know Chris Paul just got you.

DWIGHT: I didn’t know he was going to dunk that ball.

ME: [laughing] Me, either. That’s why it was so awesome. He dunked it right in your face.

DWIGHT: No he didn’t. He dunked it right next to me.

ME: Dude, that was in your grill. I was watching that game and I…

DWIGHT: You weren’t watching that game.

DWIGHT: Why were you watching us play that night?

ME: Actually, I was watching Chris Paul play. Then he dunked on you. And you know what picture I saw the other day? Remember when Marvin Williams dunked on you back in high school?

ME: You know he did! So you’ve been getting dunked on for a minute, really.

DWIGHT: I’m going to start my own basketball magazine.

ME: What are you going to call it, SLAMMED ON?

ME: You might want to come up with something a little better. [Dwight is finished dressing by now and the reporters are all looking antsy.] Um, I think they have some real questions for you, Dwight.

After they finished with Dwight, he and I sat and spoke for a minute, squashing our reoccurring imaginary beef. I was reminded once again of what a great guy Dwight is.

As I left Madison Square Garden, my mind flashed back to 2003 and that day in Atlanta. And I realized that for Dwight, debating dunks is a way of life.

I had pulled up outside the Howard home in Southwest Atlanta in my rental car. It was early on a humid Saturday morning, a few hours before Dwight was scheduled to go to his senior prom. I drove up and found Dwight’s dad — who is named Dwight Howard, Sr. — underneath a car in the front yard, tinkering with the engine.

Soon after I arrived, I gave the Howards the latest issue of SLAM, which featured a Slamadamonth of Marvin Williams in the Roundball Classic. Marvin appeared to be dunking on Dwight. Dwight immediately went on the defensive.

Luckily, I had my tape recorder running the entire time…

DWIGHT JUNIOR: I slapped the backboard when he dunked the ball.

DWIGHT SENIOR: OK, so who was playing defense on him?

DWIGHT JUNIOR: [pointing to Joakim Noah] But I had to jump over him, Daddy.

DWIGHT SENIOR: You had to jump over him?

DWIGHT SENIOR: But the ball went in the goal when you were playing defense?

DWIGHT JUNIOR: The ball went in the goal when I slapped the backboard.

DWIGHT SENIOR: So who was his defender?

DWIGHT JUNIOR: You’re not paying attention. You saw the game. [points to mag] I jumped from way out there. He was already in the air, as you can see right here. When I left my jumping, he jumped over him, and I tried to jump through him to block his shot. When he dunked the ball, I slapped the backboard. He did not…

DWIGHT SENIOR: And where’s your hand?

DWIGHT SENIOR: Right there. Seconds after.

DWIGHT JUNIOR: Which means he dunked before I got a chance to block it!

DWIGHT JUNIOR: The ball is fixin’ to go in the hole.

DWIGHT SENIOR: OK, so who got dunked on?

DWIGHT SENIOR: So what about him right here? What did he do?

DWIGHT JUNIOR: It looks like I got dunked on.

DWIGHT SENIOR: What he said! It looks like you got dunked on! But you didn’t get dunked on? OK, alright.