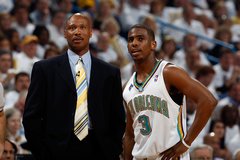 Apparently, something called Athlon Magazine is picking them to win it all next season.

Admittedly, it is way, way too early to be picking a title winner, but today is a painfully slow news day, and thus, here we are …

… Chris Paul is a year wiser; Byron Scott is coming off an impressive coach-of-the-year campaign; the team added trophy-collecting James Posey this summer; San Antonio (who eliminated New Orleans in seven brutal games last season) isn’t looking too hot these days; and depending on Bynum’s health, the Lakers are likely the one Western Conference team that could firmly stand in their way next spring/summer.

It’s not entirely crazy to envision the New Orleans Hornets showering each other with bubbly next year, is it?