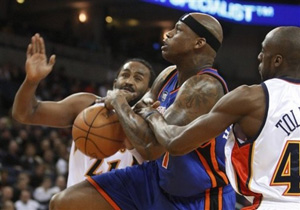 It was a late-season Friday-night game between two wayward teams, the kind that can make a reporter question his vocation. The Warriors are going to miss the Playoffs for the 15th time in the last 16 seasons, and after a while — like the coaches, the team’s staff, and the players — you wonder if there’s much left to say.

The Knicks started off hot, but the home team took control when Al Harrington, the Knicks forward who didn’t want to finish the last two years and $19.2 million of his contract in Golden State, entered the game. In a ham-handed attempt to answer a light sprinkling of boos, he went 1-7 with 3 turnovers in 8 minutes off the bench, allowing the Warriors to race out to a comfortable lead they seemed unlikely to relinquish.

So at halftime, needing a change of perspective, I stowed my computer in the media room and asked a stadium worker to help me find the highest possible seat anybody would ever be charged for.

I got off the lone elevator going all the way up, and climbed up a steep aisle the rest of the way to an empty seat at the very top. It was dark, and I could just about touch the dingy ceiling. The ceiling curved down in front of me before rising back up again, so the scoreboard, though well below me, was completely obstructed. The view of the court was like looking down through a tunnel.

The man next to me glanced down at my media badge and offered a tentative hello. A moment later we both turned as the section in front of us, full of families, exploded because Anthony Morrow hit a three to quell a Knicks rally. Kids were high-fiving, screaming, and pulled at the Warriors logo on the chests of their t-shirts and jerseys the same way the players do. The man smiled at their joy, and I figured he was alright.

It was his first time in an NBA arena, he said. The entire top row was a delegation of African government workers visiting on a State Department-sponsored trip. They were learning about the potential for moving government services online from American technology companies.

A woman in the delegation was a big basketball fan, and had insisted they attend a game on their night off.

James is from Nigeria, where major roads are so congested they sometimes become parking lots – people actually park right on the road and walk to their destinations. The highways there are in such disrepair the driver mortality rate is high – and if you survive, in some places you still might not avoid bandits who prey on stranded motorists in broad daylight. Removing the need for people to physically visit government offices is a high priority.

James works not far from Lagos, near the coast. It’s less than a day’s sail to the major departure points for people sent to slavery in North America, some of which still stand as museums.

The woman who organized the Warriors outing asked me if I could get her courtside for a photo near the players. I explained that security had been much tighter since the September 11 attacks, so I probably couldn’t.

She agreed it might seem suspicious. “They probably wouldn’t be comfortable with an African person so near the court,” she said.

Down in the locker rooms for the postgame, Harrington emerged in a bright pink shirt with a trendy blue bib, which seemed appropriate. Knicks announcer Walt Frazier cruised by in full Clyde regalia, shaking the hand of every man over 50.

In the home locker room I saw Corey Maggette, who had another excellent game. Maggette improves every year thanks to tortuous offseason training, and explained how he worked on his speed last summer. He was soaking his feet in ice water so cold his nose was running.

The players and coaches slowly drifted out. On my way back to the media room I walked past a bar built into the stadium, available only to the highest-paying ticket holders. Inside, one of the Warriors’ young players was scoring the digits of a cheerleader. Down the hallway, veterans Ronny Turiaf and Devean George patiently posed for pictures with fans.

As I left the Arena half an hour later, a father and his young son crossed the street at the mouth of the parking lot. The boy wore a full Warriors uniform, including a jersey with Maggette’s name and No. 50, game shorts, and a little pair of high tops. His blond head rested against his father’s forearm as they walked by.

Turning onto the highway towards downtown Oakland, I pulled off my media badge, laid my foot down on the accelerator, and started thinking about the traffic in Lagos.

— Say what you will about Don Nelson, but he’s connected to his young team this year – they play hard for him every night.

— Anthony Morrow’s release is quicker now than at the start of the year. “They started defending me better,” he says. “It was evolve or die.”

— After watching David Lee’s 37 points, 20 rebounds, and 10 assists against the Warriors, it’s hard to imagine the Knicks taking a chance on someone else signing him.