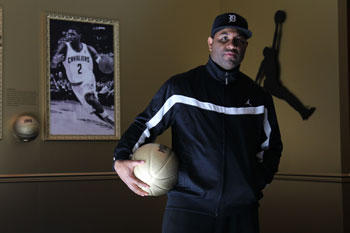 It takes a lot more than Wheaties to keep your game on point in the NBA.

Some credit the Dallas Mavericks’ impressive rise to become the 2011 NBA Champions to team owner Mark Cuban. He transformed their locker rooms into one of the best in the League, purchasing the team’s custom private jet and putting them in luxury suites for away games to give his players an extra push.

Like Cuban, team owners throughout the NBA understand that keeping players motivated is an essential element in overall player development. Management from several teams have sought after the power-packed prowess of Eric Thomas to provide the stimulation their players need to stay ahead of the game.

Hailing from Detroit, MI, the “Hip-Hop Preacher” has turned his painful past of poverty, homelessness and a broken home, into a passionate message that empowers some of the nation’s most elite athletes. Known to players and followers as “ET,” Thomas’ powerful video messages have been watched and noted by some of the hottest players on the hardwood. LeBron James mentioned ET’s most popular video, with over 10.5 million views, as part his inspiration for winning the 2012 NBA Championship.

After speaking to the Detroit Pistons’ squad during the 2012 preseason, Jonas Jerebko said ET was the best motivational speaker there is. Power forward Austin Daye also tweeted about his experience.

Thomas shared one of his passionate messages with the Cleveland Cavaliers after a practice in early October: “Eric did a phenomenal job. I felt like he was speaking to us individually in a different way. I loved working with him and I loved him coming to our camp” said Kyrie Irving, who saw all Thomas’ videos prior to the session.

One lesson Irving was reminded of by Thomas: “You’re your own worst enemy and that’s what separates the good from the great.”

Daniel Gibson, Cavaliers guard and co-star of a new reality series on BET, said one of the reasons he likes Thomas so much, is because he has a similar story to his.

“I felt like it was one of the better speeches I’ve ever heard. A lot of the troubles and the struggles he went through growing up are things I was accustomed to, so when I hear him say his mentality about being successful, it registers with me, especially coming off an injury.”

Gibson even posted one of ET’s messages in his house: “Be comfortable being uncomfortable.”

When he works with teams, Thomas teaches for about 30 to 40 minutes and allows the remaining time for dialogue; this is an opportunity for the athletes to ask questions and process Thomas’ message. “You only retain so much in lecture form. When there is dialogue, humans tend to retain more information,” said Thomas, who is currently a PhD candidate.

There was a time when Thomas was homeless and did not know he would one day be called upon by teams, corporations and educational institutions around the world to speak, but he was guided by a sense of hope. He knew that he would not always be in poverty and on hard times. He now offers that hope to others, whether they are coming off injuries, or trying to make it into the pros.

Whether you are in the League or not, here are five things to think about to keep you motivated, according to ET:

1. Remember, you are on borrowed time

Understand that you are not dealing with a clock but with an hourglass. An hourglass runs out, a clock does not end. This is sports baby, you’re three and out, five and out. You have to be one of the greats to be in the League for 10 years. You’re like milk. You come have an expiration date on you. You better drink it now and drink it quick or it’s going to spoil.

2. You made it now, take advantage of the opportunity

You’re competing against people who are great too? What’s your edge? What do you have that no one else has? What do you bring to the table that will separate you and put you in an elite group, a class of your own?

As a professional athlete, you are not in a situation where you are guaranteed a spot on a team every year. You are on trial every game. Just because you sign a contract for eight years doesn’t mean you will play all of those years. Prove yourself!

5. Want success as bad as you want to breathe

Have a tenacious desire to get it done.