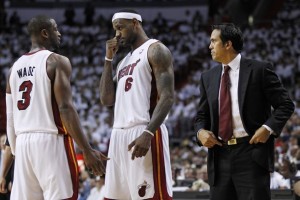 The Boston Celtics strolled into South Beach last night, and behind a flurry of jumpers, took out the Miami Heat once again. This caused grave concern on the part of head coach Erik Spoelstra, though his players didn’t necessarily sound as worried by what took place.

Repeatedly, Spoelstra told the assembled media that the Heat were “uncomfortable” against Boston, and voiced concern about the team defense against the Celtics. Dwyane Wade, though, said there’s no reason to fret.

Per Fox Sports and the Miami Herald:

“When we are uncomfortable, and we are uncomfortable about the way we are playing right now, that pushes us to make the necessary steps to improve as a team,” said Spoelstra. […] “We left Boston feeling awful at our performance,” said Miami forward LeBron James. “I don’t feel as bad (Tuesday). Boy, those guys were locked in. Not only did they make the open shots, they made all the contested shots.” Guard Dwyane Wade said the Heat are “not in a period of concern.”

“We’re being made to feel uncomfortable right now and that’s really the residual of the last three weeks or so,” said Spoelstra, who tinkered with rotations in the first half Tuesday as the Heat fell behind by 18 points before going with his bread-and-butter guys in the fourth quarter. “Are they going to shoot (like) that every time we play them?” asked the unconcerned Wade. […] “We need a streak. We need a big-time streak,” Chris Bosh said. “We need some tough road game wins. We have to put a streak of wins together. Winning always helps everything. We just have to make sure to stick together.” Wade said confidently, “We’ll be ready for the playoffs on the [April] 28th.”

Miami remains the favorite coming out of the Eastern Conference, and as DWade points out, it’s unlikely that the Boston Celtics will ring up anywhere close to 115 points (while hitting an absurd 60.5% of their shots from the field) against the Miami Heat defense again, especially in a Playoff setting.

With the postseason looming, however, and the Celtics continuing to somehow rise from the dead, Erik Spoelstra is correct in his assessment that his team needs to re-establish a level of comfort (and dominance) on the court.