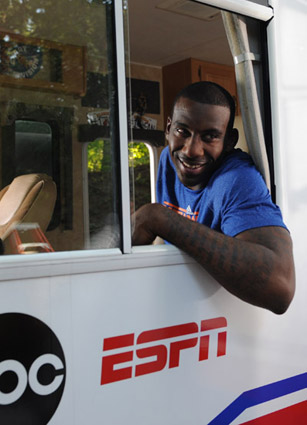 For four seasons now, NBA on ESPN’s RV Tour has been providing fans with a variety of lighthearted commercials, during which we get a rare moment to see the more personable side of our favorite hoops role models. When players, broadcasters and ESPN personalities travel the country via a basketball-infused motor vehicle, the practical jokes and awkward moments that’d riddle any other road trip are abound, and, on occasion, we even get to witness some world-class athletes at their most vulnerable.

The idea was born when The Worldwide Leader brought the NBA to its network and needed a way to market its on-air faces, said Jeff Gonyo, senior director of sports marketing at ESPN. Hence, the cause:

“We felt we had some pretty good talent—and when I refer to talent I mean our on-air guys, both studio and game talent—and thought that they really weren’t getting much exposure,” Gonyo said. “We knew they were good with the X’s and O’s and [that] they had a good personality, but we weren’t sure everyone knew that.”

“We wanted to put together a campaign that really exposed their personalities to a broader audience, and kind of infuse that ESPN personality into the NBA on ESPN,” he continued. “So [we] went down the comedic route, and what better way to do it than to put them all in a confined area with players—and players [can] also show their off-the-court personalities with our talent. And boom, we had a hit.”

I was on set yesterday at one of the shoots at Forrest Park in Queens, NY, where I got the opportunity to hop in an ESPN trailer and talk to a couple of the “actors”. First, coach-turned-broadcaster Jeff Van Gundy gave me a few minutes of his time, and then Amar’e Stoudemire, the Knicks’ great hope, let me squeeze in a few questions while he was gearing up for a game of Madden 2011 against his manager. (Amar’e also wanted it to be noted that he came out victorious, twice, both times by a score of 21-0.) Afterward, the two filmed a quick ad that—well, I won’t spoil it. Take it as yet another reason to look forward to the coming NBA season.

SLAM: So what brought you here today?

Jeff Van Gundy: Well, we’re doing the ESPN commercial that we do every year. Never been to this part of Queens, I don’t believe, so it’s good.

SLAM: We know you from coaching, and now broadcasting, but how do you like the acting?

JVG: The funniest ESPN personality? [Pauses.] Mark Jackson has a sly, sarcastic way that’s funny—but the people around him, unless you know him, don’t even know he’s trying to be funny.

SLAM: Yeah, you guys are always going back and forth.

SLAM: You ruffled a couple feathers earlier this offseason when you said the Heat could topple the 72-win mark. Now that all the offseason movement’s done, do you stand behind that? Think it’ll happen?

JVG: Well, I think this: I don’t think it’ll be talent nor coaching that stops them. I think what you can’t predict is how important records like that are to their team and their players. So I can’t predict that. But if that’s something that they’re intent on—being a dominating team—I absolutely stand by that. And I’m surprised others think any differently.

SLAM: You coached during an extremely competitive era in basketball in the 90s when the Knicks were battling the Heat. When you saw that move—three top players joining up on the same team—how’d you feel about it?

JVG: Frankly, I didn’t care. I didn’t care, but I understand why people do, and why some took offense. I don’t think very many took offense to the decisions that were made; it was probably more so a backlash to how they decided to announce the decisions, and then the aftermath to that, more so than the decisions. But frankly, as an announcer, I’d rather see Wade go head-to-head against James, because I like to see greatness go against greatness, but it doesn’t matter to me.

SLAM: Everybody’s talking about the Heat and the Lakers. Is there a sleeper team that’s gonna come mess everything up?

JVG: Well, I think there are three teams that can win a championship: the Heat, the Celtics and the Lakers. And I think the Celtics have made some really good moves—Jermaine O’Neal, Shaquille O’Neal, and Delonte West to me is a wildcard depending on his mindset, because he’s a very good player.

SLAM: Did you get to watch any of the World Championship?

JVG: I watched some, not much.

SLAM: What was your impression of the team?

JVG: Oh, they were by far the best team, [with] the most talent. I think the other teams did some good things, but I always think it’s very clear when we go to these games that we have by the most [talent]. Even if that’s our B-team, our B-team is much better than the other teams’ A-teams, by a lot. This notion that it’s all very close—I couldn’t disagree more.

SLAM: How do you like your schedule now, doing broadcasting as opposed to the coaching days?

JVG: Yeah, you’d have to take my blood pressure, ‘cause some days I’m dead. The schedule from broadcasting is like [really easy], plus I don’t internalize the broadcasting like I did the results of coaching.

SLAM: Do you miss it at all?

JVG: Absolutely. Yeah, I miss the competition, the camaraderie. Those two things probably the most, on an everyday basis. You can’t replicate those in broadcasting—you’re not going up against anybody else.

SLAM: Would a certain situation drive you back to it, or is it behind you?

JVG: No, no, I am coaching again. I hope so. But, you know, it has to be somebody else too, who wants you to have [the position], and I’ve had some good opportunities. But [there’s] nothing right now that I think is the best fit for me.

SLAM: The whole world found out you were exploring your Jewish roots this summer, so I guess I gotta wish you a happy new year.

SLAM: Tell me about your trip to Israel.

AS: It was a great trip. Obviously it was a historic adventure for me. It was a beautiful turnout.

SLAM: Is it difficult to maintain religion during the NBA season?

AS: That’s something that I try to keep discreet, so I wouldn’t really wanna talk more about it.

SLAM: OK, well we know all about your basketball skills. What are your acting skills like?

AS: Oh man, I got a lot of actors I look up to, as far as their craft and what they do. Will Smith is my favorite actor out right now. Johnny Depp is probably my second. I love Denzel’s movies. There’s my top three.

SLAM: You settle down in New York City yet?

AS: Not quite, I haven’t found a place in New York City yet. I’m still looking.

SLAM: How do you like hanging out in the city?

SLAM: How big of a factor was linking back up with Coach D’Antoni in your decision?

AS: That actually helped my decision in signing with the Knicks, because I’m familiar with his coaching style. I had great success playing with him back in Phoenix, so it’s a great chance for us to reunite and try to have that same success.

SLAM: The big complaint the past few years in New York has been the team’s defense. Many think there’s an indifference toward defense; you gonna help change that mentality?

AS: I just think the personnel the past few years was what’s been holding the Knicks back. I think now we’ve got great personnel [and] we have great character in our players, so we’re definitely gonna have a better year.

SLAM: You guys gonna be able to put up points like back in the Phoenix days?

AS: That’s what Mike D’Antoni does best. He’s great [on offense], so it’s gonna help the team.

SLAM: So I should draft you in the first round of my fantasy basketball league?

SLAM: What have you been focusing on this summer, specifically, as far as your game goes?

AS: Oh man, everything. I’ve been focusing on my perimeter game, actually, for the most part.

SLAM: Previously [for the Knicks], David Lee would often come off the pick and roll and pop the mid-range jumper. Will you be able to do that similarly?

AS: Yeah. I’ve been shooting mid-range jumpers now for the past five years, so now I’m trying to expand from the mid-range to the long-range.

SLAM: OK, tell me something about Amar’e Stoudemire that nobody knows.

AS: Something about me nobody knows…

SLAM: Who’s your favorite team to play with in Madden?

Amar’e’s manager: Whoever he’s about to lose with right now.

AS: I like playing with the Tampa Bay Buccaneers.

AS: That’s my favorite team.

SLAM: Cool. So you’ve got New York on your back right now. Any pressure?

AS: There’s no pressure, man. It’s all about playing your hardest, dedicating yourself to the game of basketball. That’s what it’s about. That’s what the goal is.

You can keep up with the RV’s progress on the NBA on ESPN site or on Twitter at @NBA_on_ESPN_RV.