Evan Turner is embracing a chance to reinvent himself and resurrect his career in Boston. 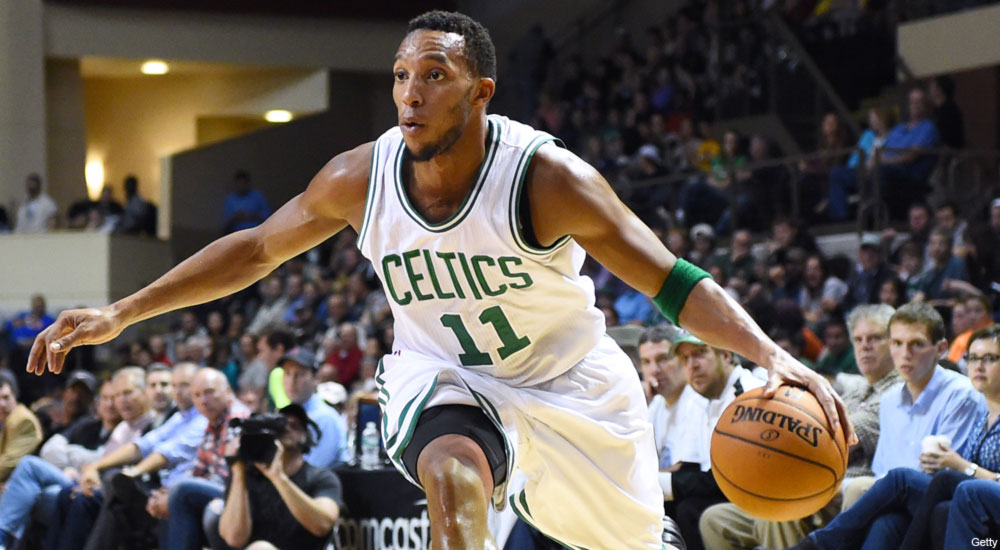 Evan Turner swivels around in the black chair in front of his locker. He’s in the far left of the Celtics’ locker room, immediately adjacent to the video staff.

“That play right there,” Turner says to a video guy, peering over the staffer’s shoulder and pointing at the film of the Celtics’ intrasquad scrimmage three days prior. The monitor shows Turner jump over a screen, preventing Phil Pressey from getting into the paint. “Footwork,” Turner says with a smile.

Tonight, Turner will square off against the team that drafted him No. 2 overall in 2010 and shipped him to Indiana at last February’s trade deadline. Nerlens Noel and the Philadelphia 76ers are in town for both teams’ pre-season openers.

Turner looks noticeably thinner. He says he dropped about 20 pounds since the Miami Heat knocked off the Pacers in Game 6 of last spring’s Eastern Conference finals.

“I just want to really emphasize on a fresh start and leave it at that,” Turner, still just 25, says. “I kind of have an opportunity to reinvent myself in regards to my body and my mindset and just be happy, you know what I’m saying?”

Turner’s time in Philadelphia ended with the Sixers dealing him and Lavoy Allen for an injured, 30-year-old Danny Granger and a 2015 second-round pick. Few in Philly forget how his tenure with the Sixers began with tremendous expectations.

He won every national college basketball Player of the Year award in 2009-10. He averaged 20.4 points, 9.2 rebounds and 6.0 assists per game even with breaking his back in the middle of the season. He returned to the court to lead Ohio State to the Big Ten championship, only after drilling a 37-foot buzzer-beater to down Michigan in the conference’s quarterfinals. Turner then pushed his Buckeyes to the Sweet 16 as well.

It was the perfect recipe for a player Philly had been waiting to embrace ever since Allen Iverson left in 2006.

Then Andre Iguodala’s presence forced Turner to come off the bench his first two years in the League. Doug Collins often vacillated between whether Turner was better off as a primary ball handler.

In Turner’s third season, Collins called Turner a point guard after he hung 26 on the Celtics in Boston. Seven games later, Collins ripped Turner for not doing enough when he had the ball in his hands. Meanwhile, Jrue Holiday was steadily morphing into an All-Star point guard while Collins and Turner frequently butted heads.

“My first few years in Philadelphia, we had unique players like Jrue Holiday and Andre Iguodala, so there wasn’t really much room for us all to do the same thing kind of,” Turner says.

Naturally, his numbers skyrocketed in his lone season without either Iguodala or Holiday in Philly a year ago. His counting stats were impressive in Brett Brown’s up-tempo system, but Turner still found his career-high 50.4 true shooting percentage rank 238th in the NBA and his career-best 13.3 PER rank only 191st.

When the trade deadline finally arrived in February, Turner told reporters, “I am excited to see what’s going to happen because it is like a riddle.”

Turner’s still close with Iguodala and Holiday. He and Iguodala split a limo on the way to Holiday’s wedding. He spoke with Holiday about a week before the Cs’ pre-season opener. “Jrue’s cool, he’s still the living legend that he is,” Turner jokes.

Besides All-Star appearances, Iguodala and Holiday share something Turner hasn’t experienced in the NBA: a big payday. Iguodala’s set to make over $12 million in Golden State this season. Holiday will earn over $10 million in New Orleans.

Turner’s first taste of free agency this summer wasn’t nearly as sweet. His best offer was signing for part of the mid-level exception with the Celtics. He says he went to Brown for advice during the summer.

He took his mind off the uncertainty and focused on improving his body. He increased cardio, replaced all red meat in his diet with turkey, eliminated soda and other sugary beverages and stopped late-night snacking.

“I stayed away from Chicago so I wouldn’t be influenced to eat all that good stuff you enjoy, you know?” he says, cracking a smile.

“I think everybody’s down on him because of how the quote-unquote ‘trade’ happened, and what happened in the trade and how Indiana played,” says Jared Sullinger, a fellow former Buckeye. “I think people misunderstand Evan. He’s a great basketball player, great teammate. I’ve known him for years, so I know he’s all about winning. That’s his main goal. He wants to win. I think we bring a great opportunity for him.”

Boston doesn’t look primed to win too much this season, however. With questions at point guard thanks to another Rajon Rondo injury and rookie Marcus Smart, Turner is once again lingering on the outskirts of an NBA team’s primary ball-handler discussion.

“I don’t think anybody is a genius if they put me in the corner and try and make me a catch-and-shoot three-point shooter,” Turner says.

Brad Stevens has tried to slow the game down for Turner. He’s emphasized “hitting singles” instead of trying to do too much and striving to counter the criticisms that come with being labeled as a draft bust. Relax. Just play basketball.

The coach praised Turner for his extensive prep in the film room as well. “When it comes to point guards or football players like Peyton Manning, they watch tons of film and I really want to be as prepared as possible to really try to succeed,” Turner explains. That preparation can only do so much though, for a 6-7, below-average athlete struggling to cement his identity on offense.

“Don’t let each day go by without getting better,” Turner tells himself now.

When you sift through his entire story, though, could Turner just be a below-average NBA player? These next two seasons in Boston will certainly help provide an answer to that question. He speaks confidently about turning over a new leaf, forging a new path in his career and taking the next step toward establishing himself in the League.

Can he one day return to form of a potential multiple-time All-Star?

“I just want to earn my minutes, baby, you know what I’m saying?” Turner says. “I’ll just keep all that stuff to myself and maybe I’ll write it in an autobiography or something.”