Even the League Admits That a Foul Should’ve Been Called 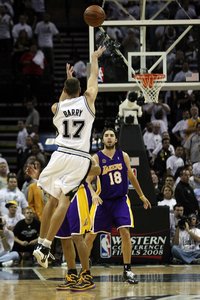 It wasn’t the reason San Antonio lost the game; heck you could even make a very good argument that had the refs done a better job (particularly, on Derek Fisher’s last shot attempt), that situation would have never even materialized.

The truth of the matter, however, is that Brent Barry should’ve been sent to the free throw line late in Game Four. Everyone knows it, even the League.

“With the benefit of instant replay, it appears a foul should have been called,” NBA spokesman Tim Frank said.

That’s now twice in this postseason that the NBA has been forced to admit that its referees made a crucial mistake – the first being on Chauncey Billups’s controversial buzzer-beating three in Game Two of the Orlando series.

Gentlemen, can we expand the use of instant replay already? Because this is getting embarrassing.