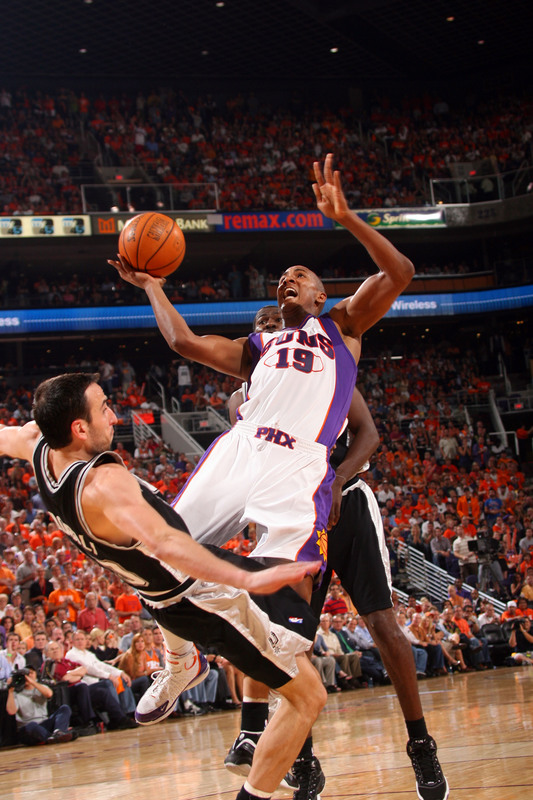 The Suns tried, and they failed to win a game that was theirs for the taking. Cub will have the game report for you in a little while. Steve Nash could not make the big shot. Choker! (I kid) Shawn Marion had his dream first half, saving his team with superstar play, and then disappeared in the second. Huge shot by Bruce Bowen, big plays by Ginobili on offense and Duncan on defense. Other than one spurt in the first half when the fans were going crazy, the game was played at San Antonio’s pace. So the Suns are on the brink of elimination heading to San Antonio. Amare and Diaw will be fresh and rested, while the other Suns had to extend their minutes and we’ll see if that affects them.

The constant flopping on both sides of this series is really annoying. Even Kurt Thomas is taking charges and flying back 20 feet. If the players are obsessively falling to the ground and begging the refs for help, can we really blame the refs for making bad calls? Stop putting them in position to decide the game. Other than a pro-Phoenix bias for most of the first half, I thought the refs did a surprisingly competent job on a night when the home crowd could have swayed them. There were a few times when guys were baiting the refs by pretending they got hit, and the refs just ignored them, which is funny and embarrassing for the flopper.

What is wrong with Leandro Barbosa? Is it just a slump? Tony Parker seems a little off too.

The other game, oh boy. Have fun with that one Jake! Today I’m out of the office on a trip to the optometrist, more specifically his waiting room for 5 hours. That’s an experience more pleasurable than the fourth quarter of the Nets-Cavs game. Jersey extended their season.

I don’t have quite the same fire of justice as I have the past few days. It’s hard to keep up that level of intensity. The unfairness of the (NBA) world has somewhat dampened my spirit.

LOST was… solid. Above average, and definitely the calm before the storm of next week’s 2 hour doomsday. Alright, Cub and Jake have the game recaps today.