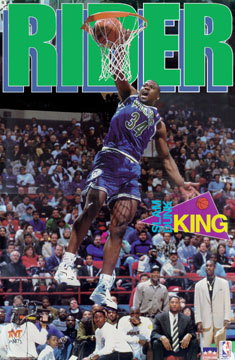 Once upon a time there was a basketball player with endless promise. He could leap out of the gym, he could stick outside jumpers, he could drive around any defender. Unfortunately, he couldn’t tell time or right from wrong.

Isaiah “J.R. for the ladies” Rider, as you guys know, has always been one of my favorite basketball players. He was a cool guy, a better player, and an endless source of trouble and humor. His time in Atlanta ended with maybe the greatest press conference of all time, when Rider entered the conference wearing a floppy madras hat (with matching madras shirt — this was before the dress code, obviously) and said that he was being made the scapegoat for the Hawks problems. Then he went on the offensive, saying that Dikembe Mutombo, LaPhonso Ellis (two of the nicest people in the world) and team trainer Chris Tucker all had grudges against him and had reported him to team management and the NBA for smoking pot. “It’s not fun to be with a team that doesn’t want you around and is looking for a reason to get rid of you,” Rider said. “Everyone wonders why I was moody at times. I had to deal with players going to the league with accusations that were unproven or anything. They had not seen anything. They had not smelled anything. It was just a vicious attack on J.R.”

From a slam dunk champ to a slam dunk nut. Hang in there, Isaiah. I still want to write an old school story on you one of these days.