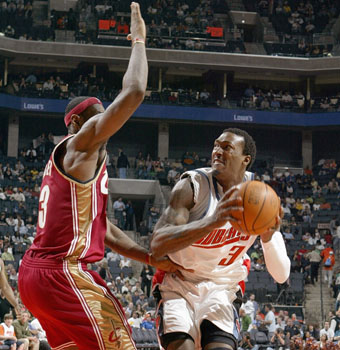 For fantasy basketball diehards the start of the hoops season is arguably the most exciting time of the year. Your roster is set, your guys are healthy, and your first week opponent probably has his tail between his legs knowing that he’s facing your crack squad.

This is your year. You’re the team to beat.

Of course this is a far cry from the way a majority of owners saw their 2006-2007 fantasy campaign end. Injuries decimated plenty of title hopes last season, but props to owners who were able to scrape their way to a title.

Having regular fantasy starters in street clothes required owners to dig deeper on the waiver wire. This was a great opportunity for lesser known guys to shine. But, if you would have told me at the beginning of last season that Mardy Collins, Tarence Kinsey, and Walter Herrmann would have played a crucial role in the fantasy playoffs…let’s just say I would’ve sponsored drug awareness promotions in your honor.

But that’s in the rear view as we head into the 2007-2008 season. New year, and unless you’re in a keeper league, that means a new look for your roster.

Let’s take a look at the top five guys at each position and go over some quick hits that will help you get a jump on your fantasy draft preparation:

Gilbert Arenas – Agent Zero swears he is going to win the MVP this season. While I have my doubts on that, there’s no question it’s going to be Hibachi on steroids this season. Don’t let his poor shooting in the preseason worry you. If you’re drafting in the fourth or fifth spot, keep Gil in mind.
Steve Nash – Calling Nash’s name on draft night pretty much shores up the assist category for the season.
Jason Kidd – Somehow he keeps improving as he gets older. Richard Jefferson, and Nenad Kristic are healthy this season and that should mean more production for Kidd.
Deron Williams – I am very high on Deron and have him ranked ahead of Chris Paul and Chauncey, which I know will surprise some of you. I see him as the more durable player and that’s everything in fantasy.
Chauncey Billups – As tough as they come, Billups is a warrior and arguably the most consistent point guard in the league.

SHOOTING GUARD – A smart fantasy owner expects more from the two-guard slot than just points, free-throw percentage, and three balls. What separates the men from the boys in this category is the ability to also grab some rebounds, dish a bit, and come up with those precious steals.

Kobe Bryant – Even with Bryant’s hazy status with the Lake Show, I’ve seen him selected first overall in many leagues already. While I wouldn’t recommend taking him with the first pick, he is a fantasy stud and peerless at the two guard slot.
Ray Allen – What’s going to happen when KG demands double teams night in and night out? A shoot around style that finds Ray Allen. As wet as he has been throughout his career, teams are going to let him fire this season. Ray should go in the mid-second round.
Joe Johnson – Before going down last season with a calf injury he was known as one of the toughest guys in the league. He is now healthy and I expect him to play in 80 games this season. Joe is still a bit slept on but the one-time All-Star warrants a second-round pick, unless you are confident you can snag him in the middle of the third.
Vince Carter – I don’t trust VC now that he is no longer playing for a contract. Last season he played in all 82 games, and was solid across the board. If you believe in Vince, he is worthy of a second-round pick, and by the numbers, he should be the second guy in this category.
Dwyane Wade – The best case scenario for Wade is a 65-game season. Worst case scenario? As basketball fans, let’s not even go there. If healthy, Wade is a top five overall pick. Can you afford to stash him on your bench until late November? If so, let him slide into the late second round and roll the dice. As good as he is, the injury status next to his name has me shook and I would rather take Michael Redd or AI in the third round.

SMALL FORWARD – The small forward position is absolutely STACKED with young talent. A marquee SF will provide owners with a little bit of everything and are consistently found on fantasy teams taking home the title each season.

Lebron James – No doubt about this one, James is head and shoulders above his peers. Some folks are a bit down on LBJ coming into this season, and his field-goal percentage and free-throw percentage are a giant part of that. Fair enough, but understand, he’s still the King and deserves serious consideration for that first pick in your draft.
Josh Smith – If you can make up for his average field-goal percentage and live with that fact that he will take some ill-advised threes every now and then, Smith is a fantasy madman. He stuffs a stat line like a fat kid stuffs a lunch box and gets owners those hard-to-fill categories like steals and blocks. On draft night Smith will take flight from the board after the 12th pick.
Andre Iguodala – Turns out AI part deux is more valuable to fantasy owners than the original. Iguodala posted three triple-doubles last season and that number should be on the rise this year. The Sixers have done very little to provide him with support and that equates to a monster season for Dre. He is a late first round to early second-round pick.
Carmelo Anthony – Once again the man for Team USA this summer, Melo will continue to be the guy in Denver. You can expect his scoring average to creep around 30 ppg, but he also boards and scores at a decent clip. I don’t worry about Iverson cutting into his production at all. Snatch Melo in the mid-to-late second round.
Gerald Wallace – Why don’t I have Rashard Lewis’s name here? I think points and threes can be made up elsewhere, and Wallace provides blocks, steals, points and boards. And while he is a bit of an injury risk, when healthy he will lead your team into the playoffs. Crash into me on draft night.