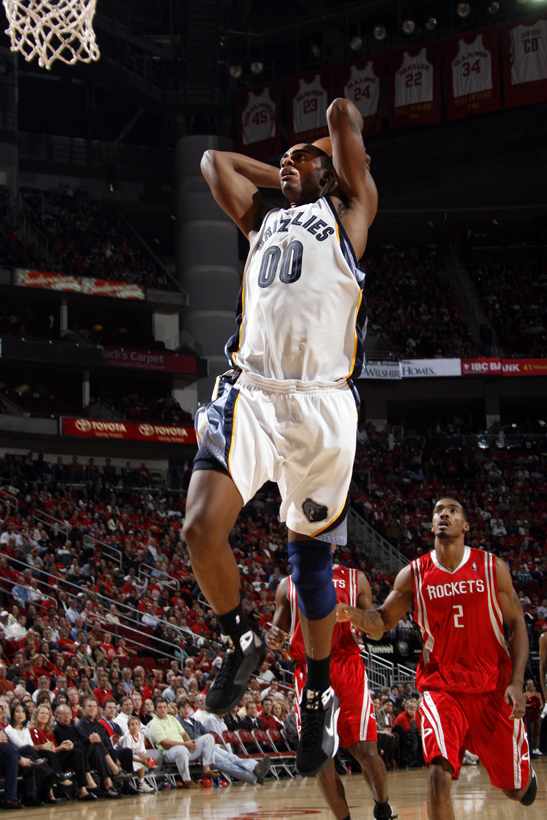 After Mike D’Antoni broke Stephon Marbury off with a DNP-CD in the Knicks home opener, I got an email from a reader complaining he had burnt an 11th round draft pick on Steph.

Although Marbury’s benching was a surprise to everyone, including Marbury himself, it may indicate the Knicks are ready to negotiate a buyout sooner rather than later.

If you’re still holding Marbury, do exactly what the Knicks are doing and bench him until this thing unfolds. If he’s waived, he may end up in a situation where he’s the starting point guard immediately. Though the season averages of 20 points and 9 assists are clearly behind him, he would be an extremely serviceable option in the right scenario.

Greg Oden’s NBA debut had Portland fans, and fantasy owners everywhere, hitting the bottle. Oden was snatched very early in drafts this season, and his immediate injury was frustrating from every possible angle.

Fortunately he’s only going to miss 2-4 weeks of action, but be sure that Portland is going to creep his recovery and take every precaution to ensure he’s 100 percent before returning. For Oden owners, this is obviously a kick in the nuts, but don’t do anything rash like cut him or trade him for a Fu-Schnickens LP.

In the meantime, Oden owners and anyone interested in boosting their rebounds and block shot totals should snatch Joel Przybilla. His game is about as exciting as an NBATV infomercial, but he’s super consistent and will produce in Oden’s absence.

You only need one look at Sean May to understand he’s no stranger to a 2 for 1 lunch special. The Bobcats aren’t feeling the conditioning of May, and have de-activated him for the foreseeable future. This is just another blow to a rough NBA career for the former North Carolina star.

In the meantime waiver-wire favorite Jared Dudley should see extra minutes. He’s the type of scrapper Larry Brown loves to put on the floor and was productive in a starting role last season. Frustrated owners should feel free to part ways with May, and look for a replacement from the players profiled below.

Each week, I’m going to be bringing you a list of guys who deserve consideration for a roster spot on your fantasy squad. Just because a player appears on this list, doesn’t mean you should run out and snatch him off the wire. When a guy does deserve to be added in 100 percent of leagues, I will make a point of mentioning that, those are the “Run, don’t walk” wire additions and they’re how fantasy leagues are won.

Waiver wire pickups will vary largely, depending on the size of the league you’re in, and the savvy of the owners. If you have a question about who you should add, or if a player is a good drop candidate, leave it in the comments and I got your back.

Hakim Warrick — He was cut in a lot of leagues because of the emergence of Darrell Arthur in the Memphis rotation. While Arthur may ultimately end up with more value, keep your eye on Warrick as well. The rookie grind is tough, and Warrick is playing for a contract. He had a nice line of 18 points and 7 rebounds on Saturday.

Rudy Fernandez — He’s not quite a must-add player, but he will be once he’s able to crack the Blazers starting rotation. He’s already answered questions about his ability to play at the NBA level, and should only improve going forward. He shouldn’t be available in most leagues.

Jordan Farmar — When he’s shooting the lights out, Derek Fisher will occasionally steal some of his shine, but I would much rather own Farmar. He’ll be inconsistent at times this season, but is capable of scoring a lot of points, and dishing the ball. He’s also a serviceable rebounder for the position, and will give you a couple three balls as well. It takes a while to earn Phil Jackson’s trust in the triangle offense, and Farmar appears on the verge of gaining that trust.

Marquis Daniels — As long as Mike Dunleavy is out with his knee injury, Daniels has an opportunity to contribute. I think he’s worth picking up until Dunleavy is actually in uniform and starting for the Pacers. He’s not spectacular at anything, but opportunity means production in the NBA.

Nate Robinson — He fits so well into what Mike D’Antoni is trying to do in New York, even though he’s not starting he’s still going to get his stats. With Marbury inactive, Robinson’s minutes will only increase this season. He’s turnover prone, and doesn’t get a lot of assists but I still like his potential.

Nick Young — He can really score the ball, and even though he wont offer much in other categories, with Gilbert Arenas shelved until god knows when, Young is an intriguing addition.

Darrell Arthur – He’s been starting in Memphis and was one of the hottest pickups in Week 1. He may eventually develop into a better pro than Hakim Warrick, but I would

rather own Hakim for the immediate future. Monitor both players going forward, and hope the position battle doesn’t ruin both guys numbers.

Wilson Chandler and Quentin Richardson — The Knicks are looking toward the future, and although Quentin Richardson is starting at the small forward slot, Chandler is going to see plenty of minutes as the season goes on. He still makes a lot of poor decisions on the floor but D’Antoni needs to develop his young talent this year. That said, I just watched Richardson drop 28 on the Bucks, so he also needs to be monitored. Richardson enjoyed his best season as a pro under D’Antoni in Phoenix, so he’s obviously comfortable in the system.

Drew Gooden — No matter what the situation, Gooden always seems to demand playing time and produce. He’s not the star everyone expected him to be coming out of Kansas, but he’s a solid pro who will shoot a high percentage and rebound the ball.

Kelenna Azubuike — I don’t like dealing with players in the Don Nelson system, but if he’s available in your league and you need some help in the backcourt, Azubuike is worth a pickup. His playing time will fluctuate but Nelly obviously loves this guy, and he should have his best season as a pro.

Alright guys, that’s it for this week. Leave any questions in the comments section and I will get back to you ASAP. Thanks for reading, and remember to stay sharp on the wire.