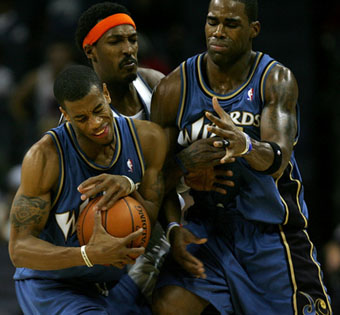 If things continue like this in Jersey, I’m going to be forced to ask Nets coach Lawrence Frank for a sit-down, with Tony Soprano facilitating.

It was a bold statement, but that’s how Williams had me feeling after his play in week #3. I had watched his minutes increase and his numbers improve. He was rebounding at a fierce rate and wracking up blocks and steals along the way. He earned his first start in the Nets lineup and it looked as though he’d done enough to secure the starting gig.

Turns out, shorty with the clipboard had other ideas. Out of nowhere coach Frank started turning back Williams minutes like daylight savings time. He played just 13 minutes on Wednesday, and 11 minutes on Friday.

Even in extremely limited minutes, Williams produced. But no one is going to have fantasy value if they average less than 15 minutes per game. On Friday night Frank gave the start to Malik Allen. Are you kidding me? Coach Frank, do me a favor this week … let the rookie live a little!

For those of you who went out and grabbed Williams, I understand your frustration. I’m there with you, but don’t cut him yet. On Friday, Nenad Kristic told reporters he is thinking about, “shutting it down” for a few weeks to get his conditioning where it needs to be, and this could open the door for our boy.

Perhaps the sit-down can be put on the back burner for now, as the message already seems to be ringing out. Last night against the Lakers, Williams played 30 minutes and recorded 6 points, 7 boards, 3 blocks and 3 steals. It’s not what owners are looking for, but the increased minutes are an excellent sign. As a result, I’ll turn off the Sopranos theme music, for now.

Andray Blatche was a very popular sleeper pick coming into the season but didn’t get a chance to burn after Brendan Haywood got off to a hot start. Tuesday night, Haywood sprained his ankle and that allowed Blatche to get his shine on in a blowout win over the Sixers. The next night he got his first start of the season and posted 12 points, 13 rebounds, two steals and five blocks. Respect!

The good news is Blatche has proven, with opportunity, he can contribute at the NBA level. The bad news is, for Blatche owners at least, is that Brendan Haywood’s ankle injury isn’t serious, and he was back in the Wizards rotation Friday night. Going forward the two will likely split minutes at the five slot. While this isn’t the best scenario for fantasy owners, both guys are going to have value. After a couple strong games, chances are Blatche is ghost from your waiver wire, but double check, and if he’s out there, pick him up.

Anyone who passed on Gilbert Arenas best have expressed their thanks before digging into that turkey this week. In case you missed it, Arenas announced on Wednesday he had surgery on the same knee he injured last season and will miss three months of action. This situation is devastating for Arenas owners who only got five games from their #1 pick before he hung his Adidas up for three very long months. Speaking of shoes, Antonio Daniels is going to be the man stepping into Gil’s as the starting point guard for the Wiz kids going forward. Daniels has always been a solid backup and should be picked up immediately in all leagues.

Blatche and Daniels are the hottest pickups in fantasy hoops right now but there are some other guys who deserve to be looked at:

Jordan Farmar – Phil Jackson has been bringing him along slow since he got into the league but with only Derek Fisher standing in the way of becoming the starting point guard, the job is Farmar’s to take. His minutes are on the rise and the longer he stays on the court, the more comfortable he looks in the triangle. If you need help in the backcourt, Farmar is a solid option with nice upside.

Monta Ellis – I received a panicked email from a reader who had just dropped Monta Ellis asking if there was a way to reverse a move made on the wire. Unfortunately, there is rarely any looking back in fantasy basketball. The fact that Ellis is super talented isn’t news to SLAM readers. Kid can flat out hoop. He’s put together two solid games in a row and shouldn’t be on waivers. Right now, Nelly is doing his mad scientist thing, figuring out a rotation, and Ellis’s minutes have suffered. If he’s out there, snatch him up and stash him on your bench until Nelly comes to his senses.

Jeff Green – The Sonics are rebuilding and if Durant is the foundation then Green is the support beams. It’s in the coaching staffs best interest to keep Green on the floor and get him acclimated to the NBA game. Fantasy value is often determined by opportunity (Jamario Moon stand up) and Green is going to get plenty of it. He had two double-doubles in week #4 and will be picked up in your league shortly. When I watch this guy ball, he just looks like he gets it. It’s not going to be an overnight thing, but he’s a player. If you want him playing for you, it’s time to pick him up.

Juan Carlos Navarro – He got off to a slow start last week but blew up over the weekend. If an impatient owner cut him, or if he was never picked up, grab him. He wont be a model of consistency but if you need trey balls there is no better option on the wire.

Antoine Walker – Whether they are looking for veteran leadership or simple showcasing him for a trade, Antoine Walker has been playing major minutes for the Wolves lately. Once again, opportunity equals value and Walker has responded. Against Denver he dropped 24 points, 5 boards, and 3 dimes and owners need to keep their eye on his minutes/production for waiver wire consideration.

If you drafted Jermaine O’Neal you had to figure injuries would be an issue at some point this season, but this early? What a beating! Apparently, there is swelling in O’Neals left knee and the Pacers are going to keep him out until they get a sense of exactly what’s going on. Injuries are an annual occurrence for O’Neal and while he remains one of the most talented bigs in the league, at this point, injuries are defining his career.

For some J.O. Relief, take a look at Jeff Foster. He’s a little inept of the offensive end but the man is a rebounding machine, and has been starting in O’Neal’s place. If you’re in a smaller league (8-10 teams) and Troy Murphy is still sitting on waivers, pick him up and enjoy a boost in value while O’Neal is sidelined.

To everyone who drafted Gilbert, all I can say is hold your head. If your team was doing well before the injury, you should think about holding onto Gil and monitoring the progress of his rehab. If you’re in the basement in your league and feeling a talented guy on the wire, obviously a drop is worth considering. I own Gilbert in a 12 team league where the wire moves at Devin Hester speeds. Right now, I’m in first place so I’m going to hold onto him and see how things unfold with him stashed on the bench. That’s a combination of not wanting to risk another patient owner grabbing him, and the fact that the waiver wire is thinner then Shawn Bradley on the 76ers right now.

Alright guys, thats what it is for this week. Post any questions in the comments section and I will get right back at you.