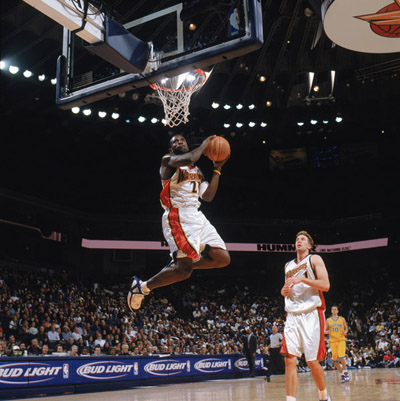 My fantasy draft for this season was at my man’s house in the Bronx on Sunday, October 29th. To get to it in time for the 4 PM start I left the Giants-Buccaneers game at halftime, despite it being one of the few home games that the Giants actually played well in and the amusing fact that my friend (also a fantasy owner) and I were sitting right behind the Bucs’ Quarterback’s father. What’s my point? That my priority on that day was far and away my fantasy draft.

Much like my priority every single morning since then has been to wake up and check my team (even if I’ve checked as late as 11 PM the night before). This lack of a life has been even more pronounced this season then in year’s past because after three seasons in the middle of the pack, I have spent much of this year in the basement. Hey, these things happen when your first five picks (in order) are: Allen Iverson, Chris Bosh, Lamar Odom, Jason Richardson and Richard Jefferson. I’ve subsequently reworked my team but there was a stretch in December when all five of these dudes were injured or not playing (thanks, Billy King!). That’s how you end up in last place…though I haven’t thrown in the towel yet.

There’s obviously something embarrassing about struggling at this considering I cover basketball for a living, but as any big-time fan knows, “fantasy knowledge” isn’t exactly the same as knowing the game. Besides, the other guys in my league are no slouches. Most of them played ball in college and the truth is that all of them know the game as well as I do, so I don’t have much of an advantage anyway. I just plug away like the rest of ’em, hoping Mikki Moore keeps up his surprising play and cursing myself for giving up on Brandon Roy early in the season (when he too was hurt). Meanwhile, I stick some money aside in case I stay in last (we certainly don’t play for free!) and enjoy the rambunctious trash talking that courses through the internet for pretty much the entire season.

Besides thinking that there might be a few slamonline readers who are interested in knowing that the editor-in-chief of the magazine is a rabid fantasy hoops player, I wanted to put this out there to see what you all think of fantasy basketball. It’s always gotten relatively short shrift here because we figured there were other places online that you can get this information, and because hardly anyone here is into it. If I’m not mistaken, my predecessor Mr. Jones actually hates fantasy basketball and thinks anyone that plays it is a loser. But I like it and if there’s folks out there in the SLAM world that like it too, we just may give it some more coverage on this site soon.

Let me know what you think.

I was going to discuss some of the stuff I worked on from the new issue but I want to wait til a few more people have seen it. Best I can tell it is not for sale everywhere yet.