Fantasy Week #12: Return of the Kings 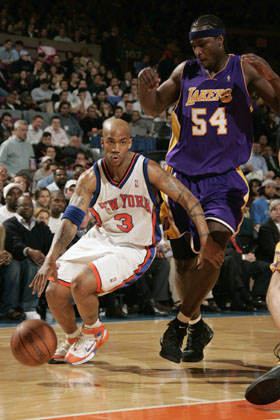 Last week I wrapped up my column with this note, “I should point out that I was going to add Kwame Brown to the waiver list for potential pickups but my computer threatened to shut down and delete the column.”

What a difference 7 days, and one twisted knee makes.

The Lakers young stud Andrew Bynum, aka Mr. Ship His Ass Out, suffered a dislocated kneecap on Sunday and will miss 2 months of action.

This one stings for Lakers fans who’ve been enjoying a 25-11 start, largely due to the emergence of Bynum in the middle. If you’re a, “glass is half full type”, you’re taking solace in the fact that Bynum wont require surgery on his knee, and will be back with enough time to get his legs right for the playoffs. If the glass is half empty, Bynum’s absence is going to cost the Lakers wins and therefore crucial postseason position.

Bynum’s absence leaves a 7-foot hole in the Lakers front court for one Kwame Brown to fill. While there’s never been anything spectacular to say about Kwame, he’s going to get burn and he will be forced to produce, whether he likes it or not. As much of a bust as he’s been throughout his career, he still possesses the tools needed to be a successful big in the NBA. If he fails here, he’s officially a wrap and might find himself in the trunk of Kobe’s car. I’m recommending Brown as a must own for the next two months, mainly because of the shortage of viable center options on the waiver wire, and the Lakers lack of depth at the position.

Stephon Marbury and the New York Knicks quest for the most shameful season in professional sports history continues this week after Marbury sat out Sunday’s game against Detroit with a phantom “foot” injury. The condition was apparently caused by Marbury’s new role as a distributor and not a scoring guard for New York. If you weren’t aware that one’s role in an offense could cause bodily injury, shame on you.

While the Knicks recorded their best win of the season, Stephon pouted from the locker room. After the game Isiah Thomas seemed to indicated that Steph simply elected not to hoop that afternoon. Stephon Marbury ladies and gentlemen, the consummate professional.

Now word out of New York says that Steph has bone spurs in his ankle and will miss at least two games. He’s on record hoping surgery is the recommended option from the medical team and all signs point to him shutting down for the season. If you still own Marbury, you might as well hang onto him for a few more days so you can be sure what’s going to happen, but I predict he’s done for the year.

Ron Artest is planning on joining Mike Bibby for his return to the Kings on Wednesday. Bibby, who’s been out since the start of the season with a thumb injury, was slated to return, but Artest is back a week early. If you own Francisco Garcia, Beno Udrih, or John Salmons you knew this day was coming but can’t be thrilled it’s upon us.

Unless your waiver wire has a guy you really like, hold on until you see how coach Theus lets this play out. The Kings will likely start Bibby, Martin, and Artest at the 1, 2, and 3 positions, but may slide Artest to the 4 leaving room for Salmons and Garcia.

As for Udrih, if you believe the Bibby to Cleveland rumors, he’s worth holding onto until you see what goes down. No matter what, it’s going to be a mess in Sac Town and the only players with guaranteed value going forward are Bibby, Martin and Artest.

Before I get into potential waiver pickups for this week I have to show some love to Marcus Camby. The former Umass big fella had 20 points, 23 boards, 6 assists and 6 blocks on Monday night. He also shot 50% from the field and only turned it over twice. That’s the definition of filling it up and might be the best fantasy night of any player on the year. The only knock on Marcus throughout his career has been his durability but (knock on wood) he seems to have figured that out and is quite simple, a fantasy madman.

Anthony Carter – Last week I suggested picking up Carter before the news about Chucky Atkins broke. With Atkins out for the season, Carter is the last point guard standing in Denver and will provide solid value for the rest of the season.

Mark Blount – Now isn’t the time to pickup Blount but keep your eye on Shaquille O’Neal’s injury situation. If something further complicates that situation, Blount, like Carter, will be the only option in Miami and will have extended value for the rest of the season. He’s an atrocious rebounder for a player his size but he can shoot the ball and a few rebounds will fall into his hands by default.

Jamario Moon– I’ve written about Moon as much as any player this season because I love guys that can produce in a myriad of categories. Moon had a rough stretch in mid-December but is back and playing at a high level. He wont blow you away but will provide points, rebounds and blocked shots to his owners. For me, Moon’s the poster boy of the NBDL and one of the best stories in the league this season.

Randy Foye – I advised picking up Foye last week to be safe but, if he’s still available, you’ve got to move now. Minutes in Minnesota have been sporadic this season for all players not named Al Jefferson, but Foye is one of the key guys for that franchise and will get tick. Pick him up in all formats.

Nate Robinson – Even with Stephon Marbury in the lineup, Robinson is a viable fantasy option. With all signs pointing to Stephon shutting it down for the season, Robinson becomes a must own player. I’m not a fan of his game but, no one can argue with his hustle and that leads to production across the board in fantasy basketball.

Kenyon Martin – Nene is taking a leave of absence to attend to a health problem that will have him out of action indefinitely. As of now, no one knows what the nature of the problem is and he’s asked that his privacy be respected in this matter. While he handles his business, the value of K-Mart will increase. If you need help with points, rebounds and blocks, Martin is a good option as long as Nene is out of action. Monitor the situation closely and decide accordingly, but for now, drop Nene and pickup Martin.

Of the players mentioned this week I think Robinson, Carter and Foye have the most value. Of that group, Foye is the wild card because he could come back torching or have a hard time adjusting after his injury. Either way, he’s worth owning so you can watch him develop from the comfort of your bench, and not your opponents.

There’s been speculation that with things in Miami swirling around the toilet D. Wade and Shaquille O’Neal will shut it down for the year in an attempt to get healthy. This past week Wade dismissed those rumors, and said he’s not shutting anything down prematurely. While this is a positive sign for Wade owners, it’s not definitive evidence he’s going to play a full season. If you can get comparable value for him, trade him ASAP. As for Shaq, he had no comment and I believe his fate will be determined when he returns to the lineup Wednesday. If a chip isn’t in the forecast, there’s no incentive for him to play and he may decide he’s had enough.