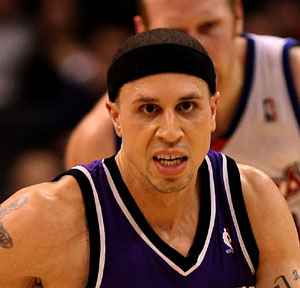 After all the speculation and complications from both sides, a point guard did end up changing teams over the weekend, it just wasn’t Jason Kidd.

The Kings traded Mike Bibby to the Hawks for Shelden Williams, Tyronn Lue, Anthony Johnson and Lorezen Wright, or more commonly known as a poo-poo platter.

This deal was a little shocking to me. Even at a later stage in his career this seems like 60 cents on the dollar for Bibby, but the Kings are rebuilding while the Hawks snag a veteran leader with plenty of playoff experience.

I’m certain the deal was shocking to Lebron James who, after seeing what it took to get it done, had to be frustrated with Cavs management. On the off chance there was a camera crew near him when this deal was announced, I’m sure the tapes were destroyed faster than Roger Goodell dumped the spygate evidence.

This deal won’t have a deep fantasy impact because Bibby is already owned in your league and of the Hawks’ players traded to Sacramento, only Shelden Williams has an outside chance of contributing, and that’s only in very deep leagues.

Part of the reason the Kings felt they could dump Bibby was due to the strong play of Beno Udrih while Bibby was injured. Udrih is a run, don’t walk pickup at this point and should be owned in all leagues. He’s going to be starting for the Kings the rest of the season and will provide very solid value.

Whether this move is a pre-cursor to another deal, or all she wrote for the Kings before deadline day isn’t clear. What’s clear from the move is that the Kings are in total rebuilding mode and keeping Artest and Miller on the roster doesn’t make a lot of sense. Artest is the easiest to move because of his contract, and I expect him to relocate. This means Francisco Garcia and John Salmons need to be queued up for additions to your roster. Other owners in a competitive league are going to be thinking the same thing and if you have a slot to play adding Salmons is a good play. If Miller’s also moved Mikki Moore would see plenty of time the rest of the season.

Kyle Lowry is another coveted name that’s been floated around and judging by the Gasol trade, he can be had on the cheap. If he’s lying in wait on your waiver wire, he’s another guy you want to think about adding before Thursday’s 3pm deadline.

The Bulls are looking to deal Ben Wallace and if that move happens Joakim Noah and Tyrus Thomas will also see a boost in value. Thomas is a guy I’ve laid off writing about this season because his minutes will drive owners insane, but his talent is unmistakable and the Bulls’ front office knows it. The question is, at what point are they going to give him a chance to make an impact? Fantasy owners should have their finger on the trigger for both these guys if Wallace or Joe Smith leave town.

Assuming Mark Cuban has enough green to lure Keith Van Horn out of Utah and this trade goes through, it will have some profound fantasy ramifications. Josh Howard owners have got to love the prospect of their guy teaming up with Kidd, and Dirk owners should also benefit.

Kidd shouldn’t get the rebounds he did in Jersey but he will still be a great #1 fantasy point guard option in Big D.

With Diop out of town, Erick Dampier will be the lone man in the middle for Dallas (scary thought) and should be owned in all leagues. The addition of Diop in Jersey will only cut into the value of Josh Boone, Nenad Krstic, and Sean Williams. Coach Frank has been up and down with his bigs minutes all season and this won’t be a welcome addition to owners relying on frontline guys in New Jersey.

Devin Harris’s arrival will put an end to the Marcus Williams era in New Jersey and should boost Harris’s value, once his ankle has healed. I had been touting Williams as a great option if Kidd left town only I didn’t foresee Rod Thorn bringing in a 24-year old point guard to replace him. This move says as much about how the Nets feel about Williams as anything else.

If Pat Riley is able to unload Jason Williams or Ricky Davis’s expiring contracts that would open up time for Marcus Banks in Miami. If the Heat aren’t able to bring in another point guard in a deal, Banks would be the starter in Miami and would become a viable option for points, threes, and assists.

While I’m discussing the Heat, Dorell Wright has been playing very well lately and will continue to produce as long as Udonis Haslem is out. He deserves a pickup with the understanding that Haslem’s return to the Heat, with the addition of Marion may return him to a reserve role. Riley loves his versatility and I wouldn’t be surprised if he found a way to keep him in the lineup, for now put him on your roster and see plays out.

Charlie Villanueva is better than Yi Jianlian right now, but Yi is the future at the 4 in Milwaukee, subsequently putting Villanueva on the block. If the Bucks are successful in moving Charlie it’s likely both players would see an increase in value with Yi instantly becoming a solid pickup the rest of the way.

There’s not much happening on the waiver wire this week after a busy all-star weekend and owners should remain focused on the trade deadline and add/drop accordingly.

Beyond the deadline deals, owners should make sure Gilbert Arenas and Elton Brand have found homes in their leagues, and preferable on their team. No matter what you read (including Gilbert’s blog) no one has a clue how these guys are going to perform after being out for so long. Brand is scheduled to return in the next couple of weeks and Arenas has targeted March 2nd for his comeback.

Assuming they were both available, I wouldn’t bring them both to my roster. Decide which player will help your areas of need and scoop him up. This has already been a wild season for players changing addresses and hopefully the precedent has been set for some more big moves before Thursday’s deadline.

Finally, owners in need of assists should look no further then Earl Watson who has really stepped his game up after posting a triple double two weeks ago. It’s also worth mentioning that if Keith Van Horn goes through with the Kidd trade he has the slimmest of chances of being in game shape and should be monitored for progress.