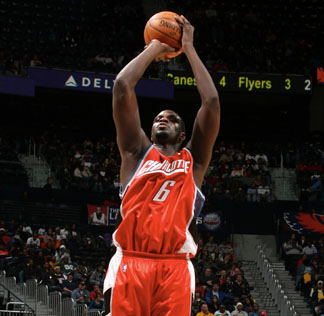 While the Big Three and the Boston Celtics remain the talk of the NBA, I’ve gotten a few e-mails from readers complaining about the fantasy lines being put up by Kevin Garnett this season.

A lot of people started the season down on King James, and with the controversy surrounding Shawn Marion and Kobe Bryant, Garnett was a popular #1 pick. At the time it seemed like a smart choice, and was definitely something I endorsed. Garnett has career averages of 20 points, 11 boards, 4 dimes, nearly 2 blocks, 1 steal, and can shoot it from the stripe and the floor. He also protects the ball and remains the fiercest competitor in the league.

Leaving a desperate situation in Minnesota to play with two superstars, he seemed poised to contend for MVP. Skeptics argued that Pierce and Allen were going to take some of his shine on offense but they’re not inside guys and he would single-handedly be locking down the paint. Also, this wasn’t a Zach Randolph-Eddy Curry situation. Allen, Pierce and Garnett have their eyes on that ring, which equates to sharing the rock.

While still a monster in the box score, Garnett’s numbers are slightly down across the board, save for the assist column. And while you can’t argue with the results (the Celtics own a 20-2 record) Lebron James’s Big-O impression isn’t making owners feel too good about their decision to call Ticket’s name.

Imagine if fantasy basketball had been around to this magnitude during the 1995-96 season. Jordan would have been the #1 pick right? Imagine watching Mike and company cruise through that 72-win season. Remember how often Jordan would watch the 4th quarter with a towel over his head? He still managed to average 30 points, 2 steals, 4 dimes, 6.5 boards, and 49% field goal percentage, but imagine what he might have done if his team hadn’t been crushing their opponents night in and night out. I think it’s a similar situation with KG and the Celtics.

The strength of the Celts’ schedule is going to improve as the season progresses and owners should expect more production from Garnett.

If you picked up LaMarcus Aldridge this year you’ve been enjoying a breakout season from the leagues front-runner for Most Improved Player (Rudy Gay, I see you). Last week, Aldridge was sidelined with the dreaded plantar fasciitis in his right foot and first reports had him missing a week of action. While it’s never the kind of news you want to hear, I think Aldridge will be ok. The condition was detected early and he was sidelined right away and fitted with a walking boot. He’s been off his foot for over a week now and with Paul Allen at the helm you know he’s getting the best possible care.

I felt so good about LaMarcus’s return in fact, that when a buy-low opportunity arose I mortgaged my season and traded for him in a package that included Gerald Wallace. It was a risky play but I didn’t lose any production because Aldridge isn’t on my active roster until the trade is processed, and all reports that I have read have him returning to form sooner rather than later. Was it the safest trade out there? Of course it wasn’t. However, I like to live dangerously, and I let that reflect in my fantasy maneuvering. Seriously though, some gambles are worth taking and in the deal that saw me give up Antawn Jamison and Marvin Williams, I liked my end.

I was losing a great player in Jamison, and selling high on M. Williams. Even though I was giving up the best guy in the deal, Jamison will slow down when Gilbert returns, and that means less production at the end of the season. Wallace has started this year very slow, but he’s traditionally a strong finisher, and that means fantasy playoff production. And while I love the improvement I’ve seen from Marvin Williams, a healthy LaMarcus Aldridge is an unquestionable stud.

But enough about my situation, let’s take a look at some of the guys who want to help you win the week:

Anthony Johnson – There’s no clear-cut solution to the Hawks point guard situation but Johnson came up with a hypothesis on Monday night against Utah. Johnson played 45 minutes and had 17 points and 14 assists as the Hawks took down the Jazz. These numbers might have been an aberration but if they’re for real, they’re too good to pass up. Pick him up and hope it wasn’t a fluke.

Jerry Stackhouse – Stack’s slow start appears behind him and he’s now putting up solid numbers off the bench. Owners can’t expect too much from the former UNC product but with Eddie Jones coming off injury, Stack is going to play a very prominent role for the Mavericks and deserves a roster spot in all formats.

Luke Walton – Walton is an interesting pickup because while most waiver guys are able to help owners in a specific area, Walton is more of an overall performer. He’s been in and out of the Lakers lineup this season, but it appears he’s finally healthy and was in the starting lineup Sunday night. His unselfish nature doesn’t bode well for all fantasy formats but his overall game will give you a boost in a number of categories.

DeShawn Stevenson – Antonio Daniels is out at least 2 weeks and while his minutes will likely be handled “by committee,” Stevenson will be the greatest benefactor because of his versatility and experience. Owners in deeper leagues should also keep their eyes on Roger Mason and Nick Young and see how Coach Jordan handles this shakeup. Also, Daniels is going to be dropped in almost all leagues and while it’s not worth stashing him on your bench yet, keep up with his progress so you can get him when he is set to return. Traditionally, he is a very tough player and may be back sooner than reported.

Al Thornton – Much like when Danny Granger came out of college, scouts loved Thornton’s ability to help his team right away. Right now would be a good time to act on Thorton because when the Clipper’s cut Ruben Patterson last week it served as a vote of confidence for the first year man from FSU. With any rookie you’re going to have ups and downs but Thornton is going to have a chance to earn more minutes right away and will produce.

Josh Boone/Sean Williams – Boone is the latest New Jersey Net to provide hope to owners looking to solidify their front line, 4 weeks ago it was Williams. Since coming out of Connecticut Boone has struggled at times but it appears he’s figured it out recently, and has been flirting with double-doubles. Coach Frank has mentioned a starting lineup that would feature both Boone and Williams, but he’s hoodwinked me in the past, so while I’m not holding any grudges, I’m also not sprinting to the computer for either of these guys. More than likely one will come away with consistent fantasy value. Note: If you’re struggling with FT% might want to steer clear because teams are using the Hack-a-Boone late in games.

Nazr Mohammed – The trade didn’t pull many headlines but there might be something to the Nazr Mohammed/Bobcats deal. The former UK product was swapped for Walter Herrmann and Primoz Brezec and should slide into the starting lineup shortly. Nazr is the prototype for inconsistent bigs so don’t drop much for him, but with a carved slot in a rotation he will produce for Charlotte.

That will do it for this week’s picks, none of those names really jump off the page but if I was selecting from the group without a specific need I like Boone, Thornton, Stackhouse and Johnson the best.

Last week I recommended Keith Bogans, and while he’s still starting in Orlando it’s possible Maurice Evans will cut into some of his tick. For now, I still like Bogans but Evans offers a more athletic option at the two-spot and I think Ron Jeremy, I mean, Stan Van Gundy will want to give that a try at some point this year.