Feeling a Draft: The Overrated and Underrated 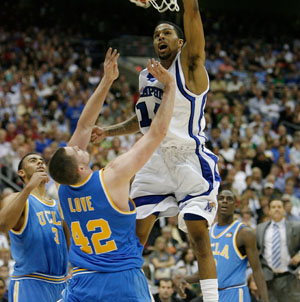 The NBA draft is very similar to the stock market. While investors keep an eye out for undervalued stock and try to avoid the overvalued ones, NBA GMs are the same. The only difference is they aren’t investing in companies – their commodity is seven-footers with wingspans like pterodactyls. While the good traders get rich off the market by capitalizing on underpriced stock, the not so fortunate end up jumping out of windows or living in a van down by the river. NBA GMs are similar – the good ones find Tony Parker, Manu Ginobili, Michael Redd and Gilbert Arenas in the late parts of the draft. The bad ones prefer Sam Bowie over Michael Jordan or Michael Olowokandi over Dirk Nowitzki.

So to help GMs keep their jobs, here are a few tips on some of the most overrated and underrated prospects in this June’s draft.

Ovington J’Anthony Mayo is going to be a star in the NBA. Projected as future number one overall pick in the draft since he was still rocking Pampers, all the time in the limelight seems to have turned some people off of the prodigy. Call it a Vitamin C overdose. The positive of all the O.J. hating is that it has probably motivated him to be an even better baller. No complaints from this corner if he ends up going at pick three (even though it is a bit surprising that he isn’t even being considered as a potential pick at slots one or two), but if he slips out of the top three like a lot of mock drafts predict, some GMs will have some ‘splaining to do.

It’s true that Arthur doesn’t have the star power that Mayo does, but if he slips out of the lottery as some people have projected it would be a mistake. He is long, athletic and strong with a good skill set. The fact that other bigs like Kevin Love, DeAndre Jordan and Kosta Koufos are projected to get snatched up ahead of him is wrong.

A playoff team from this past season is going to be very happy with this year’s draft. CDR is projected to go somewhere in the 20s in the draft, meaning a good team is going to get a very good player. Douglas-Roberts has the makings of a solid player with the potential to be a star.

Yes, his height will hinder him in the NBA, but with his roadrunner speed and solid assist to turnover ratio, Lawson should have a long NBA career.

We still haven’t figured out the enigma that is Kevin Love in this year’s draft. Yes he is reportedly losing fat and working on his agility, but still, he doesn’t have NBA length, athleticism, speed or jumping ability. He may turn out to be a solid NBA player, but picking him at number five, with Mayo, possibly still on the board? Someone’s getting fired over that.

NBA GMs have a very unhealthy love affair with seven-footers. You want proof? Next time you’re on the street and bump into Michael Olowokandi or Patrick O’Bryant, whip out your measuring tape and check their heights. Not to say that Jordan will be a complete NBA bust, but he only had four double-digit scoring games for the Aggies since the calendar turned to 2008. Picking him in the top 10 might be a bit of a stretch.

Just reread the part above about Jordan, except add in a very skinny frame, inexperience and the fact that he played in a non-power conference. Now you get the idea about McGee.

Jeff Fox writes more extensively about the NBA draft and college basketball at www.collegehoopsnet.com. All hate mail can be directed to him at [email protected].