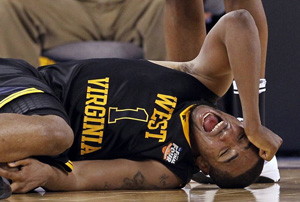 So the Final Four came down to Butler, Duke, West Virginia and Michigan State battling it out in Indianapolis for all the NCAA basketball marbles. Just like we all predicted at the starting of the year, right?! While March Madness didn’t disappoint in the “madness” department, all we care about in this space are the NBA prospects who played in the Tournament. So here is how things are looking

for the Final Four participants.

We’ve already written plenty about Butler prospects Gordon Hayward and Matt Howard here and here, so we don’t need to go into too much more detail on them. Hayward definitely helping his stock by showing his ability to play against the athletic, long BCS players on Syracuse and Kansas State. In the title game versus Duke, however, he struggled to finish shots at the rim against Duke’s big men. Howard struggled with foul trouble most of the tournament, but he showed flashes of his athletic post moves in the championship game. Another Bulldog the scouts kept an eye on was sophomore Shelvin Mack, who showed explosive scoring ability throughout the tourney.

Michigan State were a one-star team, and that one star — Kalin Lucas — blew out his Achilles a couple of weeks ago. But the Spartans kept winning regardless, with other guys stepping in to fill Lucas’ void. Durrell Summers stepped up the most and posted a double-double in the semi-final loss to Butler. He definitely improved his NBA standing with this increased exposure and looks like a potential second round pick in 2011. The only other borderline NBA prospect on the roster was Raymar Morgan, whose stock has plummeted each year he’s been in East Lansing. It looks like it will be a struggle for him to even get himself into the second round of this year’s draft.

Not surprisingly the team that won it all — Duke — had a roster full of NBA prospects. The best of the bunch could be a freshman who played less than 15 minutes a game, Mason Plumlee. His size and athleticism makes him a potential future lottery pick. Junior Kyle Singler, while not considered a lottery pick anymore, is still looking like a first round talent, either this year or next, and his Final Four Most Outstanding Player performance (20 points, nine boards per game) definitely helped. Fellow junior Nolan Smith put his explosive scoring ability on full display in the tourney and if he returns to Duke next season and shows the scouts he can run the point full-time he could work himself into the first round of the 2011 draft. Meanwhile, current Duke point guard Jon Scheyer shot terribly throughout the tournament but turned it on when it mattered most, shooting 12-25 in the Final Four. Whether or not he hears his name called on draft night is still up in the air, but his shooting and ball-handling abilities will definitely get him s

ome interest. And you can’t count out Brian Zoubek due to his size and his tremendous offensive rebounding abilities.

The Mountaineers of West Virginia were led by three NBA prospects — Da’Sean Butler, Devin Ebanks and Kevin Jones. Ebanks is the one with the most potential and could be a mid-to-late first round pick, but his uneven play this season and off-court issues have cooled his stock somewhat. Meanwhile, Butler was the team’s senior leader and All-American who looked like a lock to get picked in June until a torn ACL in the loss to Duke probably killed those chances. Jones gets the job done on the inside and out and looks like a solid 2011 second round prospect.

Read more of Jeff Fox at The Hoops Manifesto and The MMA Manifesto.