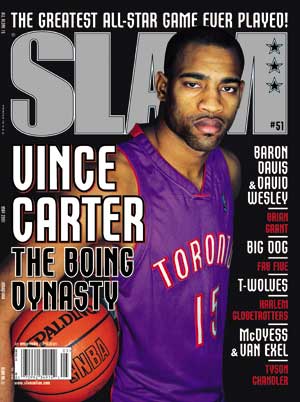 A day ago, at 3:53 pm, I got an email from SLAM contributor Michael Tillery that made me kind of loopy. Mike, who seemingly specializes in asking famous people lots of stuff, created this whole list of questions regarding LeBron’s return to Cleveland. Questions were sent out to everybody under the sun. Or maybe just me; I didn’t see the dis list. (Somewhat related: I’ve never seen Chris Paul play live. Not once. The Knicks denied my credential last year and I ended up at a freaky deeky Dutch-German-Jamaican birthday party. I declined an invite for this year’s version of that party, and, in doing so, abstained from voting. Yes, I love you; happy seven…)

Anyway, the sheer amount of questions Mike wanted answered was utterly ridiculous, so instead of fully participating, I figured I’d just write down a bunch of shit that corresponds with my odd relationship with LeBron James.

Just know that there’s a longer explanation to everything I wrote here, and that if you–the greatest commenters in the world that I know of–want, I can answer a few of your replies in the comments section. Not sure how many, though; depends on how taxed I feel.

And finally, congrats to Russia and Qatar on winning the ’18 and ’22 World Cup bids. High school reminds of a village in Argentina and a host constantly harping on the fact that “you are a Russian Jew,” and college is kind of like a grown-ass version of a Wesley Snipes movie. I’m partial to White Men Can’t Jump and Montezuma tequila and trash cans and tennis balls myself, but hey, that’s just me.

“No need for an expensive Saab cruise shtick / Alive in Tivo, alive in Vevo, listen to the music”

“’Older freshman wrote something about Rueben Patterson and a nanny, he ‘wants to chew through her’ / plus a ‘hot tub party with the freshman fifteen and Mark Chumura’”

“From passive aggressive to @$$ is progressive / an ok car, a box of hats and the plural possessive”

11) Famous people shouldn’t ask other semi-famous people to do shit for them, unless they’re sure said semi-famous writer is the right man for the job. Art over commerce. Barca over Madrid. Unless you wanna ditch Nike for Adidas. Then again, I might be joking, and I wear shoes based on how good they are—or fate—not who makes them. Wait—that explains my argument perfectly.

12) Steak and lobster—but steak in the winter and lobster in the summer. I quit the Lords (technically) and got with a Lady. Fadeaway off. A game of life won.

13) Home is where Robert Downey Jr’s iron is.

14) Tee Gee and the Kansas Dukie; Jay’s birfday. Or maybe it was just Jay’s birthday in the car.

“Bringing ’88 plus ’93 back, sprinkled with paprika and the guys behind the basket with the D –Fence”

16) Anyone who doesn’t trust an only child who reportedly listened to advice from his mother or his best friends—if this is true—should be…nevermind, I’m not old enough to finish this sentence…

17) They wanted the free food. He wanted them to want winning more. First place, but I can’t judge them. Gerber baby steps. I love free food, too.

18) I can’t ever remember being in North Carolina except for the Charlotte airport. KOBE!

“Meet the Mets! Greet the Mets, head to the park, and buy scalped tix and lose to the Padres 4-2 / What the ‘Eck? – one more night cap, slide-step to Baltimore with handicapped dish racks”

20) How many teams has Jimmy Jackson played for? And if I write a play about him, can I win a Tony even if I don’t care about winning a Tony?

“Dear Al Farooq Aminu (and friends): I apologize for not prepping well and confusing Georgia Tech with Wake Forest. That won’t happen again.”

21) That show on FOX with Will Arnett and Keri Russell had its moments on Tuesday. I’m just saying.

24) Around the world champ, I got stumped on 7×0. Seriously. How did I not remember that seven times zero equals zero? Mostly unrelated: the Washington Wizards.

25) Rest in Peace, Mike Kahn. Seattle deserves a team, regardless of whatever happens in Oklahoma City.

26) Someone once told an R Kelly joke around Eddie Murphy’s kid thinking he wouldn’t get it. EM’s kid was ten, maybe eleven. He got it. Kids are smart. Ask my newest Facebook friend. He Facebooked me.

“It takes one gringo to explain Californication to 4 Argentines, but just one Argentine to explain to one gringo how to properly say “Che” /strange daze and Adam Morrison, only player I ever profiled that made me cry”