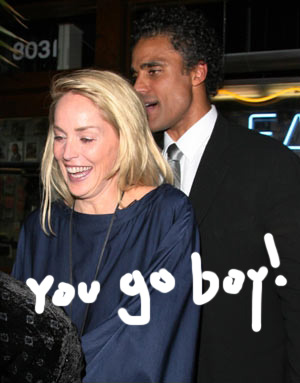 According to our good friends at TMZ, looks like foxy former Laker Rick Fox was practicing his backdoor cut Saturday night…with none other than Sharon Stone!

Talk about your basic instincts!

The twosome reportedly got their canoodle on at Hollywood hotspot Hyde over the weekend. We were with LaLohan supporting a new cause and we couldn’t make it over, but we’ll be there next time!

Sharon isn’t letting age slow her down, is she? Work it, girlfriend!