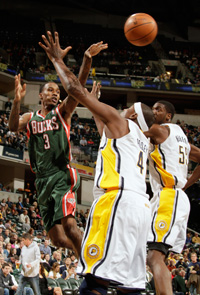 – Indiana Pacers intro video is interesting… to say the least. They pass the ball around on the streets of Indy while chasing a metal creature. Don’t worry, though. They finally kill it with a Roy Hibbert chest pass and start their introductions.

– Brandon Jennings with a nice hesitation move early. His ball handling skills are so far beyond his years. Looks like a kid with a yoyo.

– John Salmons with his first touch at the 8:43 mark. He needs to be more involved if they want to be a factor in this game.

– Pacers using a lot of flex type movements along the baseline. The high post player isn’t trying to force the pass, but sometimes is missing the open man.

– The atmosphere here is like a high school/European game with the small but rowdy Bucks fans holding up big flags during the break and chanting with the Pacers section back and forth. “You can’t do that!” “What’s a Pacer?” “Sit down Shut up!”- aimed at Drew Gooden when he got his technical at the 4:53 mark in the second quarter, “You got traded!” and “Brandon is better!”- both aimed at Darren Collison while he was at the free throw line with around 1 minute to go, are all chanted back and forth between teams. The Milwaukee Bucks brought down a nice sized crowd that is really into the game. Hibbert blows them a kiss after they chant “Bogut’s Better!”

– For all of you Darren Collison fans: He likes books over magazines, Pac-man over Donkey Kong, apples over bananas, retro over new school, and hates rain and snow. Interesting.

– Corey Magettee with the play of the game, no doubt. He dunked right over 6-10 Solomon Jones and made it look easy. We’ve come to the conclusion that he is quite a strong guy for a 6-5 shooting guard.

– The Pacers do human hamster racing during a timeout with their mascot called Boomer sliding across the floor in front of them. Pretty ent

– Keyon Dooling keeps it going with his third triple in as many attempts while Danny Granger hit two straight shots (8 points) to get on track as well.

– Jennings makes some plays that are Iverson-esque. His ability to elude contact and turn his body multiple times in the air makes him look like he is in a video game.

– Collison hit a 33-foot buzzer beater while fading to his left to push the Pacer lead to a game-high 8 points, 60-52.

– Jennings triple ignited the Bucks after trading baskets and turnovers for the first few five minutes of the third quarter. After a Pacers turnover the Bucks pulled to within two, 66-64 after a Salmons triple on the right side.

– Another Salmons triple from the same spot cuts the lead to one, 68-67.

– I’ve caught myself staring at the Bucks bench about 13 times already thinking “what if Kelvin Sampson was still coaching at IU?” Well, I would have had very exciting basketball to watch the last three years, that’s what.

– A personal 8-0 run consisting of a Euro-step, lefty finish combo, corner trey ball, and wing trey by rookie Paul George pushed the lead back to 76-67 with under a minute to go in the period.

– A Maggette jumper and a free throw by Luc Mbah a Moute made the deficit more manageable heading into the fourth, 76-70 in favor of the Pacers.

– Milwaukee goes on a 6-0 run to start the quarter and take their first lead of the half before James Posey knocked down a triple of his own. After a Maggette jumper the score is 79-79.

– The Bucks have relied on John Salmons to create buckets in the middle portion of the fourth. He’s producing buckets and getting to the line.

– Did Mike Dunleavy and Roy Hibbert just run a basketball version of Iniesta and Messi’s give-and-go ability in futbol? I think they did.

– After an Ersan Ilyasova triple and a Jennings steal and lay-in, the Bucks are in control with a 90-85 lead with 3:27 to go.

– Who do the Pacers go to in crunch time? Granger misfires on two consecutive possessions—a contested jumper after driving right and a three on the left wing.

– Great drive and dish by Salmons to Mbah a Moute puts Bucks ahead 92-86. Looks bleak for Indiana faithful’s.

– Darren Collison taking matters into his own hands. After sinking two free throws he stole the ball on the Bucks ensuing possession and finished at the rim. 92-90 Bucks with 1:00 to play.

– Granger misses a one dribble pull-up from the wing with 26 seconds to go.

Salmons fouled at the rim with five seconds to play. He hits them both and Bucks escape with a hard fought 94-90 W on the road after being down most of the game.

Paul George on if he’s gaining a better feel for the NBA game:

“I’m just trying to be more assertive and more aggressive when I get the ball. It’s a lot easier for people to guard you when you’re passive. I don’t want to be the guy who defenders want to guard.”

George on the main difference from college ball to pro ball:

“The players. These guys are the most athletic, the biggest, the fastest, and the smartest players in the world. That’s a huge difference between the low-mid major level teams I went up against every game last year.”

Corey Maggette on the dunk:

“I didn’t even know I made it. I felt something crunch in my mouth, so I thought my tooth got knocked out. Then I stepped up to the line and the ref said, ‘One shot!’ and I was shocked. I missed the free-throw though, so I was too pissed about that to really know what happened.”