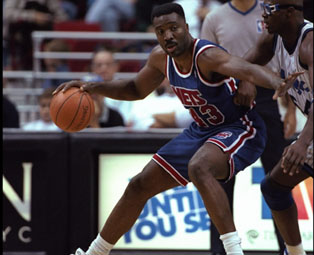 Long story short: Back in December, I asked Nets PA Announcer/PR Mogul Gary Sussman if he could hook me up with a DVD or video of the game mentioned above. After telling me I had a better chance of seeing Jesus, I misquoted him. (I also realized that I’ve misquoted one of his game calls recently. I thought what is actually “Mikki likes it!”–a great reference to Michael J. Fox’s “Life With Mikey”–was “Mikki mikes it”, which makes absolutely no sense.

Anyway, Sussman came up big and he got me the DVD of the game I asked for. I had asked because my grandfather’s company had hooked my fam up with 2 courtside seats. I have always had this specific memory from this game, which is Chris Childs throwing a bullet chest pass directly at me because Ed O’Bannon forgot to cut. I catch it, averting what would have been a potentially broken nose. I wanted to see this on film, and I wanted to see the reaction the announcers had to it. Well, it turns out it didn’t happen during the game. Which leaves two options: 1) It happened during warmups. Very possible. 2) I dreamt it up. I mean, I was 12, and my memory is foggy. Anything is possible. Even though it was disappointing not to catch this real/fake moment from my childhood, I took notes on this classic as it went down. Here they are:

–Nets President Michael Rowe and Executive VP Willis Reed present Armon “The Hammer” Gilliam with the basketball he scored his ten thousandth point with the Wednesday prior to this tilt. You the man, Hammer. Gilliam notched the milestone on a simple 13 footer on the baseline at the Bradley Center in Milwaukee.

Eagle: “The Hammer downplaying it as usual, saying he’d like another ten thousand if he could get it.

Noteworthy: The Nets, who finished the year 30-52, had just had a five game winning streak snapped in Cleveland the night before.

–Butch Beard looks a little bit like the old Seinfeld lawyer, Jackie Chiles. As Jackie once said to KKKramer when they went after the tobacco companies, “Your face is my case.”

–The Arena had officially switched over “Continental Airlines Arena” at this point, but the court was still the old Brendan Byrne parquet, with the college three point line used for Seton Hall games very visible.

–Montross misses a little lefty hook and the Nets take it the other way. Hammer draws a double and kicks it out to P.J. Brown, who wets a jumper from the top of the key. On the Celts second possession, Montross hits a jump hook over Bradley. It’s worth noting that Eric Montross might be my least favorite player of all time. I always despised him. Part of it was his role in preventing the Fab Five from winning a title, and part of it was how the shape of his head always made me mad. You know how when you’re a kid some things just make you mad. The shape of Eric Montross’s head always made me very angry when I looked at it for some reason.

–Chris Childs bricks a three and Greg Minor travels. CAN YOU FEEL THE EXCITEMENT?

–Gilliam, passing out of a double team, finds O’Bannon open right inside the foul line. O’Bannon misses the short floater and Bradley misses the tip. If I remember correctly, not being able to make a shot was a huge reason O’Bannon never could hack it in the league.

–After a Rick Fox brick, PJ Brown takes advantage of a Minor mismatch and hits over the Louisville product. 4-2 Nets.

–Montross feeds a cutting, wide open Fox, who loses the ball out of bounds. Eric Montross has cooties. Fox just didn’t want to catch it because the pass wasn’t good-looking enough.

–I might have to one day put this on YouTube: Shawn Bradley catches the ball at the top of the key, puts it on the floor, fakes out David Wesley, and goes in for an uncontested one handed slam. Rafferty: “He dunked that one from Provo!…A little bit of Dr. J in that look.” 7-2 Nets. Celtics come down; Radja feeds a cutting Fox and Bradley tells him to get the *(&#$E*(&#$*& out of his house. Then he throws the outlet pass out of bounds, just past midcourt.

–Radja shoots maybe the ugliest looking fadeaway anyone has ever seen.

–Gilliam over the double team to O’Bannon who cuts baseline and finishes with a nifty reverse layup. 9-2 Nets. Timeout Boston. ML Carr wants to shoot himself in the face.

–For the month of February up to that point, Bradley was leading the league in blocks per game with a staggering 4.9, almost a full block ahead of Dikembe Mutombo.

–Montross scores on another hook, deep in the paint that Rafferty describes as, “a pin down.” So it’s Nets 9 Eric Montross 4.

–Gilliam hits a short jumper from the elbow. Rafferty: “It’s not Easter, but he has a hop.”

–Boston rookie Eric Williams checks into the game. He’s still in the league. Barely. Rafferty says that Tommy Heinsohn calls him, “a great driver.” Heinsohn must be speaking in Rain-Main.

–Commercial break: The New Hoover Dirt finder! It electrically senses for embedded dirt to get out of your carpet! Sweet vacuum, sweeter catch phrase: You’ll know it’s clean when the light turns green.
Sprite commercial: (voice of hot woman) “Look carefully at these ice cubes, do you see a subliminal message? Do you see a beautiful naked woman smiling seductively at you? If you do, you probably just need a girlfriend.” Image is Nothing Thirst is Everything.”

–Bradley gets his second block. Montross cleans up the mess. Nets 11 Montross 6.

–It took the rest of the Celtics over half a quarter to score. David Wesley hits a three.

–Perhaps foreshadowing the fact that he would actually have a career, Brown has 9 of Jersey’s first 18 points.

–Good gosh, Dana Barros is fast with the ball.

–Fleming fronts Dana Barros and gets an easy two after Childs goes nicely over the top.

–Bradley picks up his second personal and then gets a tech for softly tossing the ball in disgust. Who called the tech? Steve Javie, of course!

–The then-Nets mascot Super Dunk looks kind of like Puff The Magic Dragon, if Puff was a crackhead, which actually, isn’t all that far off.

–Reeves crosses up David Wesley and easily eludes the poor help from NNP and hits an acrobatic layup for his first bucket as a Net.

–Rick Fox checks back in for Radja, who leaves having hit 4 shots in 11,000 attempts. Dee Brown checks in for Wesely.

–Greg Graham replaces Reeves. This Nets bench was the opposite of deep, like the bottom of a tiny boat scraping along sea floor, or Paris Hilton.

–Before Dana Barros hits a fadeaway, I lean over, courtside, and tell my brother something. It was probably something along the lines of, “No, Tibaz,” is hotter.

–Todd Day knifes through the lane and hits a layup. Anyone else remember when Todd Day and Lee Mayberry used to run shit (sort of) in Milwaukee? Braud Lohaus, Frank Brickowski, good times…

–Shawn Bradley blocks a three and then PJ Brown airs a jumper.

–Going into the game the Nets trailed the Hornets by 4 games for the eighth spot in the Eastern Conference.

–Dino Radja finds a cutting Alton Lister who finishes with a one handed dunk. Boston goes up by 1. Rafferty notes that Lister was known for his defense during his Milwaukee days. I did not know that. Funny he should say that, as Bradley spins and dunks on Lister (And-1) on Jersey’s next possession. In fairness, Lister was 37 when Bradley dunked on him.

–Childs and Gilliam help the Nets open up an 8 point lead at the break.

–Jayson Williams, always candid, refers to Kenny Anderson and Derrick Coleman as “primadonnas” in an interview briefly shown at the start of third. The two had both finally been dealt, and Williams was talking about how it was easier for everyone on the team to be friends and talk about basketball without the primadonnas around.

–Chris Childs and Armon Gilliam start the second half where they left off in the first, the former burying long jumpers and the latter abusing people in the post.

–Gilliam’s patented one handed release is ugly, yet pure.

–With the Nets maintaining their high single digit bulge, Bradley hacks Dino Raja in front of the basket. Javie calls a foul on him. We can easily hear Bradley plead his case to Javie, “OH NO! COME ON! STEVE! STEVE!” Javie doesn’t even look at him.

–Vern Fleming checks in and Childs moves over to the two guard. With Kendall Gill injured, the Nets have nobody to play the off-guard, which is why O’Bannon has been starting there.

–Eagle notes that this rendition of the C’s is the worst defensive team in the NBA.

— Rick Mahorn’s ass is so big; it probably has moons revolving around it.

–Don Casey, who would be the head coach of the Nets only a few short years after this game was played, is serving as an assistant for Boston. He’s also, one might presume, doing more coaching than ML Carr.

–This game took place before all of the seats at Continental were Craig Sager pink/purple. Some of lower seats were, in fact, dark, vomit orange.

–Dee Brown has a tattoo of the Tazmanian Devil aboce one of his ankles.

–Rafferty: “Oh my, what a screen by Mahorn. Check your bi-cuspids…Ricky just loves to lay the wood.”

–Pervis Ellison nails an elbow jumper. Just in case you were of the belief that such a thing wasn’t possible.

–The Hammer abuses the rook, Burrough. A quick spin and a pretty flip after being fouled. And-1.

–A Fleming jumper and Childs pull up on the break give the Nets a 14 point cushion. Seems insurmountable.

–Barros drills a three to bring Boston within 7.

–With just over two minutes left, PJ Brown gets called for a goal-tending violation that brings Boston within 3.

–Radja goes up and under before getting his shot blocked by Bradley. Replays show that Radja was fouled. Still, Shawn Bradley is impacting this game’s outcome in a big way. Let that marinate for a while.

–Chris Childs muffs the inbounds pass from PJ Brown, who was inbounding, literally, 2 feet away. Brown just throws it off of his knee.

–Dee Brown ties the game at 105 with a jumper off a pick and roll.

–Childs feeds Bradley. Bradley is fouled. Bradley does not feel the PRESSURE and drains both.

–Barros misses a three. Childs grabs the board in is fouled. He sinks both.

–Fleming is fouled. Hits both.

–We get a close up of Butch Beard’s suede shoes.