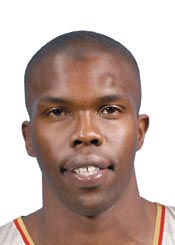 Despite a comedy of errors, I was able to successfully drive a friend of mine to the airport this afternoon. She barely made her flight. Very close call.

So why am I choosing to watch this game? Why not?

OK, I’ll fess up: when scanning the schedule for this evening’s games, it said Charlotte vs. Utah, and I mistakenly thought Chris Paul would be going up against fellow stud point guard Deron Williams. Another reason why the Hornets should have never left Charlotte. Oh well, I’m sure Voskhul vs. Collins will be just as exciting.

Gerald Wallace scores the game’s first two points on a strong drive to the cup. At first, it’s unclear who tonight’s broadcast crew works for. After the Wallace bucket, and the gleeful yelp of “GERRRRALLLLD!” by the color guy, it’s no longer a mystery.

Lots of empty seats at the Delta Center (are they still calling it that?) tonight. I’ve always wondered this: why are the seats in Utah green when nothing of the sort can be found in the team’s colors? This is troubling.

Tonight, the ‘Cats are without Emeka “The Human Block Party” Okafor. He’s on the chilling list with a strained left calf. Sean May is also in street clothes. To compound matters, Charlotte is in the midst of a miserable six-game road trip, and they’ve lost five in a row. Not good times.

You should know that I’m toggling between this game and “Heroes” on NBC, for the first half at least. NBC promised that they would be showing a sneak peek at the newest “Spiderman” movie (being released this summer), and I don’t want to miss it.

The broadcast crew is slobbering all over Deron Williams (who is featured in the current issue of SLAM). They’re particularly impressed by the fact that Williams is shooting 47% from the field as a point guard. And frankly, so am I.

A nice wrap-around dish from Deron to Carlos Boozer makes it 19-15 for the Jazz with 4 minutes remaining.

Jarron Collins hits a jumper in the lane to push Utah’s lead to 9.

(Now, which of the Collins brothers is this one? The greater or the lesser?)

On a commercial break, the preview for “300” comes on, and it looks absolutely bad ass! Really looking forward to that one.

It’s important that you’re aware of the fact that the play-by-play guys for the Bobcats refer to point guard Brevin Knight as “BK”. That is just…unfortunate.

Walter Herrmann, who seriously needs to buy a vowel, and is a forward for the Bobcats, looks like a pro wrestler. This is also unfortunate. Regardless, he is able to knock down an open three on the baseline.

Dee Brown comes in to give Deron a breather. Alright, I’ll ask: Is Brown the first Jazz player to braid his hair? Have there been any predecessors?

G-Wallace (or if you prefer, GERRRRALLLLD!) has scored 14 points in the opening stanza. He’s also wearing what appear to be shoulder pads of some kind, to go along with a white elbow sleeve. Him and Lamar Odom have to be the most accessorized dudes in the L.

League Pass or no League Pass, I doubt that most fans would be able to pick out half of the guys on the Bobcat roster in a police lineup.

(Seriously, who the hell is Ryan Hollins? When did he begin to exist?!)

Matt Carroll, who looks all of 14, checks out after picking up his second foul on a reach-in. Two Matt Harpring freebies make it 41-28 for Utah with just under 9 minutes remaining in the first half. Such a riveting matchup.

Sweet Baby Moses! I think I just missed the Spiderman preview. Thankfully, there’s an additional 71/2 minutes of it on NBC.com. Giddy up!

GERRRRALLLLD! has racked up 20 points in the first half so far. He has managed to do this without taking a single jump shot, which is remarkable. He’s also making Andrei Kirilenko look very bad on the defensive end.

(Speaking of the Russian, what the hell happened to this guy? I know he’s had injuries, but does that explain such a dropoff? Dude has seen his numbers plummet in every meaningful statistical category, and looks like a shell of the player he used to be. It’s practically unbelievable that he was considered one of the 50 best players in the NBA on this website this summer. Very strange.)

Naturally, as soon as I rip into AK-47, he catches a pass on the wing, spins past Wallace, and tomahawks it home. I feel stupid.

Also on the tube at this moment: “Dexter” (which is a brilliant television program, and doesn’t get NEARLY enough praise); “The Boondock Saints” (a cheesy, yet remarkably enjoyable film). OK, back to watching Jake Voskuhl and his mesmerizing bald spot!

11 point lead for Utah (54-43) with just under 2 minutes remaining in the half. Some fans are outright napping in the stands.

Wait, when did Derek Anderson join the Bobcats? I need to pay more attention.

A nice set play out of a timeout frees Boozer for a layup. There wasn’t a defender withing five feet of him on that one. The guy who looks like a pro wrestler (Herrmann) then makes a three as time expires to cut the Utah lead to 10 at halftime.

Let’s discuss “The Boondock Saints” (which is being shown on IFC at the moment), shall we? I’ll admit that it’s a totally implausible tale that kindly asks the viewer to suspend their disbelief for a couple of hours. It cannot be denied, however, that it’s a highly enjoyable film: the quotes; the cat scene; William Dafoe (who delivers a great performance); the two brothers’ ridiculous wardrobe; the scene in the bar where they beat the crap out of the Russians; the crazy bartender with an affinity for a certain four-letter word; etc. Right, the game…

Mehmet Okur, is quite simply, taking over. The Turk has scored 7 quick points to open the third q. Of course, the play-by-play guys are forced to point out that Okur scored his points against an overmatched Gerald Wallace. To make themselves feel better, they refer to Wallace as (you might want to sit down for this one) “a superstar”. Riiiiiiiiighhhht.

17 point lead for the Jazz after Okur hits another silky jumper (give him 26 quiet points for the evening). 7 minutes remaining in the quarter.

(While we’re here: Okur looks like the kind of guy who absolutely cleans up at the Euro night spots, no? I would love to go club hopping with him someday.)

Can someone please tell me what happened to Eric Williams’ head? He’s had that knot for centuries. Eric, for the love of God, you make NBA money. Get that shit taken care of!

Right now, the Jazz have five pale guys on the floor. And yes, I’m counting Boozer and Deron Williams. Only in Utah.

Unless Utah absolutely collapses, Jerry Sloan should be very pleased with his team’s effort tonight. They came out and completely demoralized the opponent and never let up. Who knows, coach Sloan might even refrain from crudely referring to one of his players as a part of the female genitalia.

Matt Carroll and G-Wallace both wear that elbow sleeve thing. So, by my count, that makes three fashion trends (the elbow sleeve, the braids, and the tattoos) that Allen Iverson is directly responsible for popularizing during his career. Not too shabby.

Wallace has had himself quite an evening. So far, 29 points on 11/16 shooting from the field. It’s a shame the rest of his squad decided not to show up tonight.

(Do you think Michael Jordan actually takes time out of his schedule to watch this team play? I’m guessing that he’s watched no more than 10 games this season. At the very most.)

Derek Fisher lives! Fish hits his first shot of the game using his patented side-of-the-head jumper. Man, it seems like forever since .04.

The play-by-play guys, who’ve done a pretty decent job tonight, tell a great John Stockton story: It seems that Short-Shorts used to warn his teammates during practice that if they were to miss more than one open shot that he created for them, they weren’t going to see the ball again. Jeez, no wonder he racked up so many assists!

GERRRRALLLLD! take a seat with 33 points (13/19 shooting from the field, and 7/8 at the line). I would like to re-iterate that he did all of this without requiring the aid of a single jump shot.

Add Jeff McInnis to the list of guys that I had no idea were on the Bobcats, let alone still in the League. Jeff, for the record, looks terrible.

An Okur jumper gives him 28 for the night. Women in the stands then start throwing various pieces of underwear onto the floor. Oh, alright…

And tonight’s award for Most Shameless Display Of Homerism goes to the Bobcats play-by-play crew, which gives Player Of The Game honors to GERRRRALLLLD! despite the fact that his numbers came in a losing effort. Whatever.

A late-night dinner and this month’s issue of Esquire.