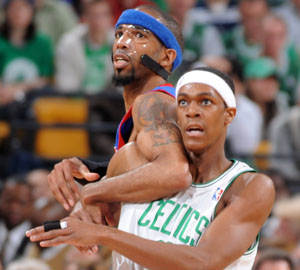 For those who subscribe to the suspect theory that a playoff series doesn’t begin until the road team wins a game, consider these Eastern Conference Finals underway.  Thanks to the play of Billups, Stuckey and the rest of Detroit, the Celtics now have no choice but to win a game outside of the cozy green confines of The Garden if they hope to advance to the Finals.

While the opener was some combination of Detroit shaking off the cobwebs and Boston ridding the emotional wave of Game 7, Game 2 was a golden opportunity for the Pistons to steal the home court advantage and put some pressure on the Celtics.  Detroit did just that, as stellar point guard play led a well-balanced Pistons effort that trumped the best playoff effort yet from the JesusTruthTicket.

The Celtics shot 49% from the field and got a combined 75 points from The Big Three and still came up short.  Whether it was Dice killing them softly from midrange or Rip driving for shot after shot, Detroit’s total team effort fueled their 103-97 win.

The plot thickens.
Here’s how it went down.

Pistons defense active – Rip picks up Rondo full court and they trap Allen out of the pick and roll.  Pressure eventually forces a shot clock violation.

And four minutes in we finally have a pistons field goal courtesy of a McDyess jumper.  Other end, back-to-back scores from Garnett put the Celtics up 5, 9-4.

Other end, Rip hits, and somehow Detroit’s within 2.

Boston D comes up with three straight takeaways.  The first two on blocks, third on a rondo steal.

Meanwhile the Ray Allen downward spiral continues.  Admirably, he’s being assertive and making a concerted effort to not just be a spot up shooter.  He’s driving to the tin but the only problem is he’s missing, a lot.   On a play typifying this, Allen dribbles off a screen, eludes the double team and drives to the rim.  Instead of doing something crazy as attempting a shot, he dribbles through the paint, and throws it out to Rondo who can’t do anything with it as the shot clock ticks away.

The DPOY can’t make every play.  KG doubles the ball off the pick-and-roll leaving McDyess open for a slam, 14-12 Boston.

Looks like the hamstring will not be an issue.  Chauncey pulls up for the baseline jumper and knots the game at 18. Safe to say he’s going to trump his nine points on 3-6 shooting performance from Game 1.

PJ brown trips over his own two feet but somehow Sheed picks up the personal, his second, and is forced to the bench.

For the Pistons, the Stuckey show continues.  Somehow, the rookie finds a seam in the C’s defense, drives into the paint, hop step, layup, and-one.  23-20 Detroit with 9:22 left in the second.

The emasculation of Ray Allen continues.  Driving right on Rip, Hunter comes in and simply rips the ball from him.  Adding insult to insult, Ray whistled for the foul as he falls on top of Hunter.  Perhaps thankfully, foul trouble gives Ray a seat on the bench.

A guy in the stands is rocking the #5 Celtics jersey, of Ron Mercer.  That’s actually mildly impressive – almost like a purple heart.

KG from top of key drive crossover to the middle, back to the right, Dream shake, fadeaway, bucket.  A lot of steps in there but I guess it as worth it, 40-37 Detroit.

Pistons swing it around to Chauncey who drops three as clock flips to zero. Next time down, Rip curls free for a jumper.  A jumper from Prince would extend Detroit’s lead to 9.

Rip, clearout on Tony Allen.  Drives right, gets him to bite, rattles in jumper, 50-41.

The Celtics open the quarter on a 15-4 run to take a four-point lead.  Is it physically possible for the Pistons to try hard for 48 straight minutes?  This team could score 3 or 30 points in a quarter and neither result would really be a surprise.

The run was the highlighted by the return to form for Ray Allen.  After stealing a Detroit pass, he hits the pull up jumper, sending the crowd to their feet and pulling Boston within two.  Minutes later, Ray strikes again, hitting a baseline jumper, 58-54, Boston.

On the other end, The Pistons go bombs away from deep to put an end Celtics surge. Rip, Sheed and Chauncey connect for three straight threes to put Detroit back on top, 63-60.

Garnett hoists a three? Is this some sort of reverse Skee-lo phase? Does the 7-footer wish he was a little bit smaller?  That three point attempt makes sense because…?  Though next time down, Garnett hits from just inside the arc, 66-62.

Paul Pierce sets up on Prince.  The entire building knows he’s going to dribble right pull up and shoot a fall away jumper.  Surprise surprise, he does just that to pull Boston within three.

Stuckey feeds Sheed for the three, buckets.  Detroit outscores Boston 10-3 to close out the quarter and take a nine point lead going into the fourth.

Eastern Washington standup.  Stuckey, sets up on Posey, drives then hits the step back jumper.  Moments later, drives the left baseline and hangs and hits over Davis, sending the crowd back to their seats.  Later, another Stuckey jumper silences the Boston crowd and puts Detroit up 11.  Hitting shot after shot, Stuckey is single-handedly outperforming the entire Boston bench.   Lil’ Big Shot?

Despite this Boston claws back into it.  Ray gets the feed up top and hits a three to bring Boston within two.  It’s way too easy for me to make a Jesus joke here.

Billups up top passes to the curling Rip.  As KG steps out to contest, Rip finds Sheed on the baseline.  Sheed hits. 96-90 with 2:19 left, Boston timeout.

Out of the timeout KG jumper from baseline, 96-92.

Richard Clay Hamilton.  As the shot clock ticks away, Rip drives by Garnett, and takes off for the floater from 15 feet. Onions.  25 points for Rip.  Detroit +6 with 48 ticks left.

Inbounding the ball, Billups curls free – someone forgot to rotate.  The uncontested reverse layup by Chauncey puts Detroit back up by six with less than 20 seconds left.

It’s not quite over yet.  Ray hits three over Sheed. 100-97 with 10 left. I smell a screenplay – How RayRay Got His Groove Back.  Anyone have Terry McMillian’s email address?

On the other end, a free throw from Sheed pretty much ices it.  No Gino tonight.

As the buzzer sounds and both teams head to the lockers, Sheed and KG share an embrace on the court.  Between the hugs and pats on the back, the two forwards exchange kind words to each other. While its tough to decipher what was said between the two, one thing that is now abundantly clear is that by everyones definition, this series is now officially on.