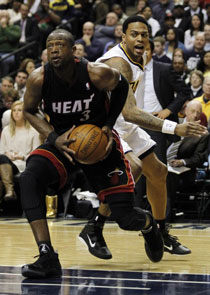 The Indiana Pacers have been playing with some serious confidence ever since Jim O’Brien was fired and, even if their newly appointed, youthful head coach Frank Vogel doesn’t want to take any credit, there is no denying that he has certainly given the Pacers a new lease on life this season, injecting energy into the locker room.

“A lot of the things that we’ve done to our offense simplifies things and makes the spacing more consistent,” stated Vogel during the pregame. “Because of that, we are becoming a much better passing team and a much more patient team. We attack the basket and when an option is taken away we simply make the extra pass and work it until we get a great shot.”

Nobody was more aware of this fact heading into Tuesday’s collision with the Indiana Pacers than Miami Heat head coach Eric Spoelstra.

“They’re playing with tremendous confidence and that happens sometimes with change,” said Spoelstra. “They’re playing extremely fast—they were doing that before—the ball is moving, everybody is involved. It makes it tough when they play at that pace and we have to be ready for it.

“It was high octane the other night in our building and it’ll be turned up two or three notches in this building and that’s the thing we have to be ready for right from the get go. We are a running team, but we have to dictate the tempo. It has to be absolutely on our terms.”

With this attitude in mind, the Miami Heat stormed out to an early lead behind Dwyane Wade’s (41 points, 12 rebounds) intensely

efficient 9-13 shooting from the floor and 4-4 from the line, which led to a total of 22 points. At times, he had the Conseco Fieldhouse crowd in awe of the utter control of the game that he displayed—whether sinking a dream-shake, sky-high turnaround from the baseline or throwing a full-court, Aaron Rodgers-esque money pass to receiver LeBron James (who later insisted that it was comparable to a Rodgers-to-Greg Jennings completion) for an alley-oop, Wade had it working.

“I never knew how Tom Brady, Aaron Rodgers, Jay Cutler and them guys felt but I did on that one,” Wade, who tied a franchise record with 31 points in a half, said during the postgame. “On that one I felt it was a perfect pass and you gotta have a good receiver on the end of it, so ‘Bron made it look good.”

Indiana was down by the score of 41-19 after one, Wade had outscored them by three, and things looked bleak. The Pacers could have done the easy thing and laid down for the Heat, who were playing some pretty good basketball (eight wins in a row) before their demise in Boston on Sunday afternoon.

But they didn’t. They fought hard and clawed their way back into the game in the second quarter behind the inspired play of their bench, which led to a 35-17 effort in the second quarter. The Pacers keyed in on Wade more and subtly forced other players to get involved, which Miami had trouble adjusting to at this point in the affair.

“I told them, ‘This is your Playoff experience right now,’” said Vogel. “There’s going to be a sellout crowd against one of the best teams—obviously their star power is unprecedented. They are treating this like their first Playoff experience.”

And indeed they did.

During one sequence of disarray for the Heat, Paul George (14 points) knocked down a triple, Danny Granger (14 points) stole the ball on the subsequent inbounds pass, and then knocked in a triple of his own to tie the game at 64. Indiana proceeded to take a 73-68 lead at the 5:33 mark and Tyler Hansbrough knocked in a 19-footer at the buzzer to take an 83-82 lead into the fourth quarter with the home crowd on their side.

The game stayed close until almost the midway point, but then it was LeBron James (27 points, 5 helpers, 6 boards) turn to take over.

After driving to the left elbow, pump-faking and losing his defender, James had a clear avenue to the rim, but since he had already used his dribble, he decided to pull a Tracy McGrady, tossing the ball off the backboard to himself and then slamming it home to give the Heat a 93-91 lead that they built upon down the stretch thanks to another eight points by James and timely free-throw shooting, as Miami earned every ounce of their 110-103 victory.

Though the Heat worked hard to get the W, Coach Spoelstra is aware of his team’s constant struggle to bring a consistent effort for the entire length of the game.

“We need to push for a championship level consistency and whatever quarter that may be—second quarter or third quarter—is to bring it to a consistent level all 48 minutes.”

And while the Heat continue to search for a consistently high effort level, Coach Vogel and the Pacers believe in theirs.

“I’m proud of our guys,” Vogel said. “This is what I’m talking about when I talk about smash mouth basketball. Blood and guts, never quitting.”