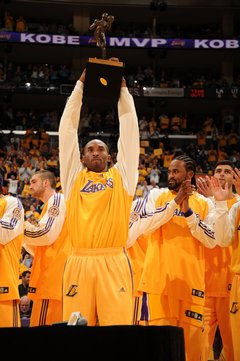 Prior to the game, the NBA (and, yes, Kia Motors) presented Kobe Bryant with the first MVP award of his Hall of Fame career. Did you know that of all the MVP winners in League history, Karl Malone and Bryant have had to wait the longest to get the coveted award?

(Obviously, as a Laker fan, I’m thrilled that the media finally pulled their heads out of their asses long enough to Kobe finally got his long-overdue recognition as the best player in the universe. A part of me, though, can’t help but feel as though Steve Nash should’ve been flown in and forced to give at least one of his trophies to Bryant. Still bitter about that? Yes, I am. Thanks for asking.)

David Stern, business-minded as always, makes sure to include the NBA’s ubiquitous Playoff tagline “There Can Only be One” in his perfunctory remarks while presenting the trophy to Bryant. The man never takes his eye off the bottom line.

As the crowd breaks out into a deafening “MVP” chant, Kobe’s teammates come over for to offer their congratulations. If one didn’t know better, you might think they actually like the guy. I kid, I kid.

Kobe is then handed a microphone, and tells the crowd that he loves them, that he’s got many years left in a Laker uniform, and that his Lakers are going to be playing until June. “Um, do kindly ignore everything I said in late May,” Bryant does not necessarily add.

-With the game about to start, Bryant has that wild and crazed look in his eye – well, even more so than usual. This could mean one of two things: 1) An absolute evisceration of the Utah Jazz, or, 2) Kobe trying to do too much on the offensive end, and the series going back to Salt Lake City all knotted up. We’ll see what happens…

-Andrei Kirilenko knocks in the Jazz’s first two shots. A wide open jumper, followed up by a mechanical move inside.

-Both teams are playing well offensively, and the Lakers – following a devastating in and out crossover by Lamar Odom on Mehmet Okur – have started the game 6/6.

(AK 47 doesn’t care about no MVP award, as he chases Bryant down on a fastbreak and catches his layup attempt. The angular Russian then knocks in another long jumper to give his team a one-point lead.)

-As Odom finds Vlad Rad, who then hits a streaking Gasol with a nice pass for a strong finish, every Memphis Grizzlies fan on the planet (all 14 of them) contemplates jumping in front of a moving train.

-Ronnie Brewer, tasked with the thankless and exhausting job of checking Kobe, has been doing a pretty impressive job of keeping Bryant in front of him, and has even gotten his hands on the ball a couple of times as Kobe tried to get to the rack.

(Of course, as soon as I type that, Bryant sizes the young man up, and drills a three in his eye. Lakers up 22-13 with a little over four minutes to go in the opening stanza.)

-Deron Williams is almost completely no-existent in the early going. The stud PG has no points, and only two assists so far. To make matters worse, he gets his sh*t sent by Ronny Turiaf after venturing into the lane.

(His point guard counterpart Derek Fisher, meanwhile, is very existent. The vet knocks in his second bomb of the game to push the Laker lead to 13.)

(Speaking of white people, Kyle Korver gives Utah their first sign of life as he drains a baseline three, cutting the Laker lead to nine and forcing Phil Jackson to take a timeout.

I know Phil talks about wanting to let his teams figure it out on their own as the reason why he often refuses to call timeouts when things are going badly, but I don’t think that has anything to do with it at all. I honestly think it’s because he hates having to stand up from his throne-like chair, and making that funny looking walk of his.)

-With Kobe on the bench with two early fouls, his teammates have maintained a comfortable double-digit lead, and look as though they could easily close out the half without his services. I can’t imagine myself writing what I just did at any point during the last two postseason trips for this team.

-It’s a good thing Paul Millsap showed up tonight, otherwise the Jazz might have not come out of the locker room after halftime. His relentless play inside has kept the team in the game, and the Lakers don’t have an answer for him at the moment.

-Carlos Boozer, meanwhile, has completely disappeared off the face of the Earth. Check out this hideous stat line for the hairy-chested one midway through the first half: 6 1/2 minutes, 0 points, 0 boards, 0 assists, and 3 fouls. Yikes.

-With a minute to go in the half, and its two best players a combined 1-9 from the field, the Jazz are only down by ten points (and as such, theoretically still in the game.) This is about the only thing Utah and its fans can hang their hats on at this point.

-The Jazz start the second half on a strong note by scoring the first two buckets – and hey, a Carlos Boozer sighting! – but Kobe negates all of that by driving in for an easy layin.

-Kobe’s footwork is out of this world. Since he doesn’t have a prayer of slowing him down in the post (or anywhere else, really), Brewer should bring a pen and pad out there with him. Those notes could come in handy at some point in the future.

-Deron Williams seems to have taken his vitamins at halftime, as he routinely beats Fisher to the cup in the early going here. Suddenly, he has 7 points and 7 assists. His team, though, remains in a 14-point hole.

-The good news for Utah: Their shots – and especially those of their name players – are starting to fall a little bit. The bad news for Utah: the defense is a stinky mess of porous and no-existent. Oh, and Kobe is going nuts in this quarter; the newly-minted MVP has 15 points in the third (giving him 27 for the game.) That would qualify as very bad news for Utah.

-The new Mitsubishi ad, featuring assembly-line robots playing hoops with tires, is easily one of the better car commercials that I’ve seen in a long time. You would think that an industry with a practically unlimited budget, and such a vast presence in media – print and broadcast alike – would tap into the creativity well a little more often. Yet, I digress.

(Yes, I’m talking about car advertisements in the middle of an NBA Playoff game. That’s how riveting the contest has been thus far.)

-If the Jazz didn’t have to play defense, they would be in tremendous shape right now.

(To be fair, the L.A. isn’t exactly playing the stopper role in the second half (they allowed Utah to score 34 points in the quarter), but at least they tried on that end of the floor to start out the game.)

-After D-Will gets mugged on his way to the tin (no call; hey, welcome to L.A., Deron!), Sasha Vujacic and his greasy mane of wild hair knock down an in-rhythm jumper on the ensuing break.

(Deron, never one to get discouraged, attacks the rim again and the refs finally send him to the line.)

-Without question, Paul Millsap has been the Jazz MVP tonight. The big fella has 17 points and 8 boards (5 of them offensive) so far. His ferocious play in the paint has kept Utah in the game; they trail by 9 with a little under eight minutes to go.

-Out of the timeout, Matt Harpring curls off a screen and wets a jumper. Six point game. OK, I’ll admit it: I’m a tad nervous now.

(Um, TNT, you know I Iove your work, right? I really do. You’re the best in the biz, no doubt about it. That being said, please kill this new camera angle that you’re using; yeah, the one that looks like it’s being brought to us by a hand-held camera. It’s nauseating and I can’t focus on the action. Thanks.)

-With about six minutes to go, as an infuriated John Malkovich said in Rounders, the Jazz are just haaangiiing arrround. 99-92 Lakers. Here’s to hoping the Lakers, unlike Teddy KGB, don’t tip their hand and lose the pot in the end.

-Derek Fisher, who’s not eating any Oreos, nails a back-breaking threeball from straight away. The bomb pushes the lead back up to 10, and the nervous Staples crowd erupts.

-Moments later, Kirilenko gets inside and scores on an and-1. Lead down to 8.

(Kobe then comes back, and after splitting a double team with a spin move, he wraps the pill around a dazed and confused Okur. The gorgeous feed finds Pau Gasol for an open dunk. That may have been the final stake in Utah’s heart tonight.)

-Despite a bunch of meaningless three pointers from D-Will, the final minute is nothing more than a parade to the free throw line for the Lakers, and they close out the Jazz in rather convincing fashion to take a 2-0 series lead.

Utah can score, this they have proven in the series’ first two games. What they absolutely must do, if they plan on making this thing competitive, is defend their homecourt (literally.)

If the Jazz let the Lakers shoot 50% and above from the field again, especially in Utah (where, legend has it, the home team never loses), then this affair will be over quickly.