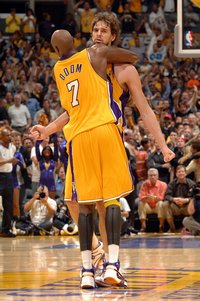 -There are no great truths to be gleaned from the Laker victory in Game Five, except for maybe this: The Lakers, predictably fired up, came out and delivered the first series of punches and never trailed in the game. The Jazz, stunned in the early going, eventually picked themselves up off the mat, and though they lost, they were right there until the very end.

(Though the game remained close, not once did it feel as though Utah could pull off the upset. Of course, the very same thing could be said of the Lakers when they played in Utah.)

-Kobe Bryant must have heard the critics over the last few days, as he attempted an almost-unheard of 10 field goals. He made six of them, and spent much of the evening at the free throw line (as did many of his teammates), allowing him to finish with a team-high 26 points. Don’t worry, he’s saving his shot attempts for Game 6 in Utah.

-Are both teams’ offenses really that great, or is the defense on both ends of the ball simply non-existent? I’m leaning towards the latter. It’s so bad that even the vacationing Phoenix Suns are blushing at what they’re seeing.

(Neither team seems to be able to put the clamps on the other, and victories are simply being determined by who’s playing on their home floor. This is why I’m perfectly prepared to watch a stress-filled Game 7 on Monday night.)

-Next time you hear anyone make the claim that the regular season doesn’t mean anything, please, slap them for me. In the second round of the Playoffs, home teams are virtually undefeated. To date, only Detroit has managed a road victory in the conference semis.

-One completely unrelated, but sufficiently amusing note: Avery Johnson was in the TNT studio last night. During the halftime segment of the Lakers/Jazz game, wearing a suit that he apparently picked out from the Craig Sager Collection, the former Mavs coach may have set the new Guinness World Record for the number of times a TV analyst said the word “turnovers”. Just a stunning two minutes; you really had to be there.

-The good news for the Lakers as they head to Utah, and try to close out the Jazz, is that they’re coming off their most offensively balanced game of the series. The entire starting lineup scored in double figures, with three guys getting 20+.

(The bad news is that the game is being played in Utah, where not only are the fans some of the loudest – and most loathsome individuals – in the League, but I’m pretty sure it’s against the law for the Jazz to lose in that building.)

The first team to give defense a try will have plenty of reason to celebrate on Friday night.