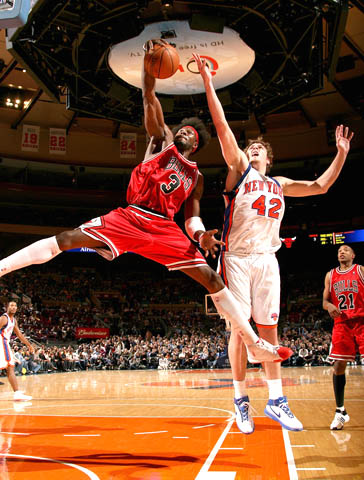 I took notes all game, but I’m not even going to look back at them as I type this. Why bother? The word of the day (and quite possibly the season) is APATHY, and if no one else cares, I’m not going to either.

Things are bumping along the bottom at the Worlds’s Most Shameless, and with every double-digit loss it becomes increasingly apparent that nothing is going to change anytime soon. It starts at the top, where the slumping Jim Dolan (for all you Douglas Adams fans, he’s the Hotblack Desiato of team owners) has done nothing to show that he cares at all about the few fans the team still has (today’s matinee was a sellout, but judging from the noise level, many of the 19,000 seats were filled with mannequins and scarecrows). Dolan doesn’t care what you think or say, and neither does Isiah Thomas, who shockingly still has a job as 2007 rolls over into 2008. His press conferences are increasingly absurd, as he comes up with new rationalizations on a daily basis. The beatwriters don’t care, as they just echo his ramblings (perhaps realizing that their readers can see through them as well as anyone). The team doesn’t care, decimated as it is by injury (both emotional and physical), nonsensical substitution patterns and a nearly complete dearth of actual plays (I’ve never seen a team commit more turnovers out of time outs and at the beginning of quarters). And even the fans don’t seem to care anymore—the “fire Isiah” chants have decreased, not because of any success, but more because of the realization that the powers-that-be could care less what the paying customers think.

Today’s opponent, the Chicago Bulls, provided quite the contrast. GM John Paxson DID fire his coach, Scott Skiles, and replaced him with assistant Jim Boylan. And Boylan stepped right in with an immediate lineup change, taking Ben Gordon out of the starting five in order to give the second unit more punch. And for the moment, it’s worked, as Gordon has averaged 27 ppg in his first two games since moving to the bench, and the Bulls have gone 2-0.

The Knicks, on the other hand, are in free-fall. Today’s starting lineup was almost entirely new—Zach Randolph, David Lee and Jared Jeffries up front, with Nate Robinson and Quentin Richardson in the backcourt. Robinson, who received DNP-CDs in blowout losses to the Suns and the Pacers, was starting for the first time. And it’s unclear how Jeffries, who has been at best ineffective in his time in New York, earned a starting spot at all. The first lineup shakeup, which saw Randolph sent to the bench and Eddy Curry starting alongside Lee, was a complete disaster. Randolph was upset about being sent to the bench, and Curry played less than 10 minutes total after getting into immediate foul trouble and being sent to the bench two minutes in.

Today’s game started better, at least. The Knicks missed plenty of easy shots inside, but cleaned up on the offensive glass, and despite shooting under 35 percent trailed by less than 10 at the half. It was all downhill from there.

The Knicks’s problems remain the same. Teamwork is a dirty word, as offensive players dominate the ball. No one moves without the ball. There are no set plays, no set rotation. Opposing players get clear looks at the basket (especially from the perimeter), and convert at a spectacular rate. Gordon dominated in the fourth quarter, and even Ben Wallace got into the swing of things, cleanly netting his first two free throws and sinking a pair of fallaways. Tyrus Thomas earned a DNP-CD, and Thabo Sefolosha was a garbage-time afterthought. Despite all that Isiah’s said, it’s obvious (to everyone but him, apparently) that the Knicks simply don’t have the talent to compete for 48 minutes. Or the drive, which in the end is the same thing. This afternoon, the highlights were few and far between (an Eddy Curry dunk here, a Nate Robinson drive there). At least Renaldo Balkman got to play.

I could offer suggestions, but why bother? It’s abundantly clear that no one’s listening.